One Australian family owned company is backing maritime pine bark as the best supplement to help minimise and avoid many of our most common health problems.

Brendan Howell, Director of Arborvitae Health and Wellbeing, an Australian business that produces the Arborvitae range of products containing maritime pine bark designed to quickly and efficiently re-set the immune system and bring down inflammation in the body, believes so.

Maritime pine bark is used to make medicine which helps with a range of diseases and health problems, including: diabetes, asthma, and even arthritis.

Brendan today explained “arthritis is one of the key diseases where maritime pine bark can assist in the minimisation of symptoms.  Many people have reported significant improvements in their arthritis after taking maritime pine bark over an extended period of time.”

According to the Australian Bureau of Statistics, 15.3% of Australians (3.5 million) suffered from arthritis in the period of 2014-2015.

“The main complaint that people with arthritis have is their regular experience of joint pain and soreness.  This limits their ability to move around and participate in activities without pain.   Research has shown that maritime pine bark assists to alleviate these symptoms.”

Arthritis is a general term for joint inflammation that is used to describe some 200 conditions that affect joints, the tissues that surround the joint, and other connective tissue.   Arthritis affects millions of people and conditions often involve pain, aching, stiffness, and swelling in and around one or more joints.     Risk factors include:  weight gain and obesity, joint injuries, infection and repetitive joint use.

“Inflammation is a normal part of the body’s healing process and it is body’s defense response to viruses, bacteria, injury and burns.  Unfortunately, in the case of inflammatory arthritis, inflammation occurs in the body for no apparent reason.  When this happens it causes damage to joints which causes pain, stiffness and swelling,” Brendan added.

“Some foods are known to contribute to inflammation including animal derived foods and diets high in refined sugar.

“Gout, which is one form of arthritis, is closely linked to diet, caused by increased levels of uric acid.

“Diet and lifestyle can certainly assist to manage and reduce the symptoms of arthritis however unfortunately in most cases, it is never enough, which is why adding maritime pine bark to your daily diet is an important move.

Plants and plant extracts have been used for thousands of years as a healing remedy. Native and indigenous people around the world are still using plant-based remedies.

“Plant-based remedies and supplements are a useful complement to modern medicine and sometimes, they do even better than the pills we all take,” Brendan added.

“Before modern medicine, plant-based remedies were used to heal both serious and non-serious ailments.  Unfortunately, many people in the 21st century believe that plant-based healing is a fad.  But for many of our ancestors, it was what kept them alive!  If it worked then, why can’t it work now?”

Maritime pine bark was first discovered by native people in the Mediterranean and North American regions.  In the winter of 1535, the ship of French explorer named Jacques Cartier became stuck in ice in a river located in a region now known as Quebec (in Canada).

It is now believed that the tea that Cartier’s men drank came from the bark of the Maritime Pine (arbor vitae) pine, which contained large amounts of vitamin C and other nutrients.

“Cartier’s story is incredible.  It’s a story of survival and how human beings can use nature to improve their health.  Nature is its own pharmacy.  The native Americans who helped Cartier understood that and we need to understand it too,” Brendan added.

“With the growing body of evidence showing that maritime pine bark helps the body to combat diseases such as arthritis and many other conditions including heart disease, stomach complaints and memory loss, there are compelling reasons why maritime pine bark should become part of the daily diet.”

Aborvitae products are sold online and now stocked in over 500 pharmacies and health food stores throughout the country.  An explosion in demand for Aborvitae products fuelled by positive feedback from users is seeing the company put in place significant expansion plans.

Black Is The ‘New Black’ In Credit Cards: Make Sure You Shop Around 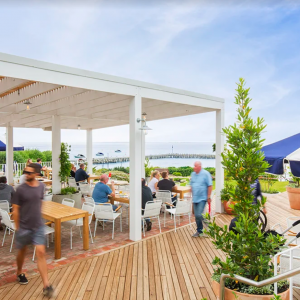 Portsea Hotel is set to light up the Mornington Peninsula when it welcomes its inaugural Winter Lights pop up this Queen’s...
© Onya Magazine 2009 - 2020
Back to top