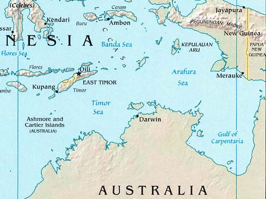 We are all too familiar with ‘issue’ films that follow a white, western protagonist into a troubled developing country (El Salvador, The Constant Gardener, Blood Diamond, The Last King of Scotland). We associate with the moral outrage of the bystander, raging against the apathy of the rest of the world, who ignore the harsh and chaotic brutality. Australian film, Balibo, has received a lot of press, bringing attention to the killing of five journalists in 1975 and the cover-up that followed. The film is political, its purpose to inform and rally. Unapologetically Australian focused, Balibo is concerned with a very small period of time, in what was a long struggle to independence for East Timor. After watching Balibo you should be furious that the truth has been unacknowledged for so long. Balibo should be just the start though, because if we are exploring Australia and East Timor’s relationship, then there is so much more to be angry about. 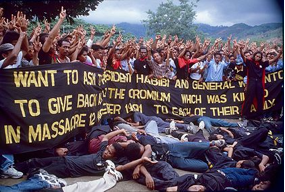 East Timor suffered twenty-four years of oppression, at the hands of their neighbour, Indonesia. President Suharto’s military invasion and subsequent isolation of East Timor produced an estimated death toll of 200,000. This equates to approximately 29% of the pre-invasion population, making East Timor’s annexation ‘one of the deadliest episodes in recent history’. During the years of occupation East Timorese human rights were violated in a number of ways; murder, torture, rape, forced relocation and economic and cultural suppression.

Why did Australia, its other neighbour, turn its back on this small nation? Australia’s foreign policy influenced East Timor’s fate; from the approval of the Indonesian invasion to Australian peacekeeping forces ensuring independence. By opting for a foreign policy that promoted good relations with Indonesia above any other obligations, Australia benefited from the oppression and murder of thousands of people. How and why Australia betrayed, and then ‘saved’ East Timor is a heady mix of economic and political self-interest with media coverage.

‘Although we know it is not true, the formal position of the Indonesian government is still that there is no Indonesian military intervention in East Timor. If the Minister said or implied in public the Indonesian Government was lying we could invite a hurt and angry reaction.’ Cable from Richard Woolcott, Australian Ambassador to Indonesia, to Prime Minister Gough Whitlam- October 1975

On the 28th November 1975, East Timor declared independence after centuries of Portuguese rule. On the 7th December 1975, Indonesia invaded Dili, with the pretence of self-defence against the hostile ‘communist’ East Timor. The Australian Government had forewarning of Indonesia’s plans, yet did nothing to assist the impoverished nation, an hour and a half north of Darwin. It was a David and Goliath size up, with Indonesia outnumbering East Timor, 200 to 1. 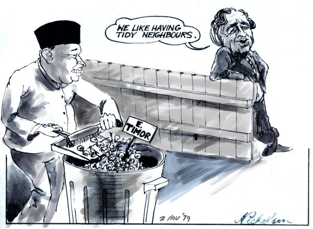 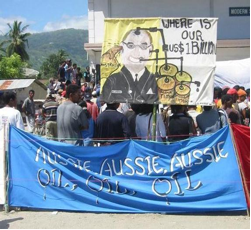 Between 1976-1980 Indonesia began a program of exploiting East Timor’s natural resources. Keeping out all foreign media and aid organisations, the Indonesian Government insured that widespread famine and disease was hidden from outside scrutiny. Human rights were not high on the Australian Government’s agenda; this was the time to profit from their friendship with Indonesia. From the early ‘70s onwards Australian Governments, on both sides of politics, engendered a relationship with Indonesia designed to increase their access to the billions of dollars worth of natural gas and oil reserves located on the seabed of the Timor Sea, know as the Timor Gap.

In 1979 Australia became the only country to officially acknowledge Indonesia’s right to control East Timor, a precondition to formal negotiations beginning over ownership of the Timor Gap. Effectively stabbing East Timor in the back twice – firstly plundering one of their only natural resources; and secondly helping to reinforce Indonesia’s claim to East Timor, giving de jure recognition to the annexation and confirming Indonesia’s right to negotiate on areas previously defined as East Timor’s territory. 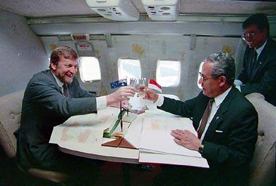 The Australian Government’s handling of the Santa Cruz massacre highlighted inconsistencies in their international policies. Condemning Human Rights infringements in China and Eastern Europe, Australia ignored the perpetrators in their own backyard.

The Santa Cruz massacre on the 12th November 1991 was Indonesian forces’ most visible act of violence against East Timorese protestors. In front of international journalists, they opened fire on a crowd amassed in the Santa Cruz cemetery, in what appeared to be an organised attack. Two well-known American reporters were targeted by Indonesian soldiers; Amy Goodman was beaten, whilst Alan Nairn was almost fatally wounded with a rifle butt. This violence was captured by an American photographer and most significantly recorded by an undercover English reporter.

Photo taken by Steve Cox during the massacre

‘The [Indonesian] army cannot be underestimated. Finally we had to shoot them. Delinquents like these agitators must be shot, and they will be, whenever necessary.’ Sutrisno, then Indonesian Armed Forces Commander-in-Chief, proclaimed two days after the massacre.

Unbelievably, despite overwhelming evidence and public outcry, the Australian Government continued to support Indonesia. Foreign Minister, Gareth Evans, called the violence ‘an aberration’; no sanctions were imposed on Indonesia, bucking the trend set by the UK and US following the massacre. Australia’s support continued, going so far as to recommend the UN reduce resolutions against Indonesia. 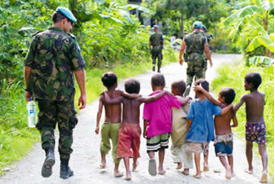 After years of Bipartisan support in the Australian Government for its foreign policies towards East Timor and the promotion of good relations with Indonesia, in the mid- 1990s there was a change in Australia’s approach. The topic suddenly became a good opportunity for the parties to score points off each other, especially with the increased media coverage East Timor was garnering.

When Suharto stepped down in March 1998, his replacement President Habibie was stuck in a difficult situation. Needing to assure international aid, he announced a vote for East Timor. They had two choices, either to gain autonomy as a state of Indonesia, or opt for full independence. After the Habibie announcement, Prime Minister John Howard took personal responsibility for Indonesia’s softening approach because of a letter he had sent the new president. It was from that point that the reinvention of the Australian Government as East Timor’s saviours began.

On the 30th August 1999, 98.6% of East Timorese went to the polls. The results were announced on 4th September, with 78.5% voting for independence. For three long weeks whilst the UN’s Security Council debated over whether to send in a peacekeeping force, East Timor was enveloped in violence. The decision to use the Indonesian army to provide security for the vote and its aftermath proved tragic. They did nothing to stop the violence of pro-Indonesian groups, and worst, the army actively encouraged and participated in the violence.

Exhaustive media coverage of peacekeepers popularised Australia’s image as saviour of East Timor. The large and highly visible role that Australian troops played in securing East Timor’s independence after their referendum, allowed the government to wash away years of political collaboration with Suharto’s brutal regime.

Balibo and the Role of the Media 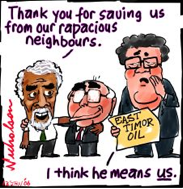 Cartoon by Nicholson for The Australian, www.nicholsoncartoons.com.au

The presence of western media in third world conflicts is seen as a reflection of interest and concern. The camera has come to represent a viable tool to combat oppression. This relies on the power of the media to ‘mobilise shame’. The assumption being, if human rights violations are placed on the international stage this forces action; if human rights perpetrators are visible, this forces them to endorse the UN’s Universal Declaration. This is certainly the premise the Balibo Five were working under, having seen the successful coverage of the Vietnam War and the resulting protests in America. However this principle ‘if only they saw’, means that visual truth has come to hold ultimate importance in reporting. This is why the Balibo Five stayed to film the invasion in October 1975. They knew that successfully raising awareness in Australia meant providing visual evidence. Indeed it was the increasing visual evidence of violence in East Timor, during the 1990s, which played a major part in changing Australia’s foreign policy.

There is a critical scene in Balibo where Roger East (Anthony LaPaglia) confronts Jose Ramos-Horta (Oscar Isaac) with the ugly truth of media coverage. East tells him that five murdered white faces will make the front page in Australia, where as the death of many ‘brown faces doesn’t mean shit’. It is a succinct and accurate description of the nature of media reporting during conflict. 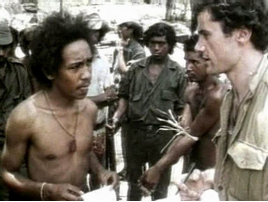 Greg Shackleton (a member of the Balibo Five) interviews an East Timorese man in Balibo http://cache.daylife.com/imageserve/00Ehfz55t80Gl/610x.jpg

The current reality of reporting is that foreign conflicts are given less and less coverage. The issues are too complicated, the visuals too graphic, the people suffering are too far away. How else can audiences be engaged, other than by relating the issue back to their own lives? The really difficult question we have to ask ourselves is why the modern media is so concerned with ‘us’ and so very little with ‘them’. Indeed whose fault is it that so many conflicts rage in media silence, the producers or the consumers?

Balibo is for all intents and purposes an example of white faces being privileged over dark faces. The film unashamedly uses the plight of these journalists to politicise Australia’s involvement in East Timor (an involvement that this article only scratches the surface of). The Balibo Five, and Roger East, certainly felt an affinity with the Timorese people, and they risked everything to try and help their plight be heard; if their story means that more Australians become aware of East Timor’s recent history, all the better.

To find out more about Balibo and East Timor visit the consulting historian, Dr. Clinton Fernandes’ link – Film vs Reality at http://www.balibo.com

Sources for this article include;

Geoffrey Gunn, ‘Lost and Found: How did the world rediscover the ‘lost cause’ of East Timor?’, Inside Indonesia, 60, October 1999.

That’s a piping hot argument. Are we able to address these problems without digging too deep? Great article, have been interested in this for years, but who are the real East Timorese?

There is now plenty of information on Timor Leste and its people, University courses, and we are free to travel there now. Dissemination of information via popular media outlets was then and continues to be influenced by corporate network agendas and their relationship to the Government policy of the day. Fortunately, the truth eventually emerged and all information is now available on the world wide web. As yet it is not as censored as public newspaper, radio and television. The suppression of the truth does continue in issues of war and peace and it is through the availability of education to the populace and the lesson of diverse humanity to think, understand and act humanely, if one is able and fortunate enough to have resources available.(BA Drama&Screen,Hons International Relations&Politics,PG Dip Creative Writing, MA Creative Industries under completion.)

I knew nothing of this era in Australian history before seeing the film. Clearly not Australia’s finest moment. I am in awe of the Australian journalists who gave their lives to bring this horror to the knowledge of the Australian people and the world. It’s heart breaking how governments are like psychopaths.

By Sarah Willcocks Writer’s block. Sometimes we wordsmiths stare at a blank page, and the words downright refuse to spring...
© Onya Magazine 2009 - 2021
Back to top