Wild Turkey today announced its Creative Director, Matthew McConaughey, will visit Australia this November to launch With Thanks, an initiative designed to recognise, and support Aussie’s demonstrating unwavering conviction to protect and preserve their unique wilderness.

Wild Turkey’s With Thanks local launch is as an Australian extension of a three-year global program.

According to the Foundation for National Parks & Wildlife, Australia has lost 25% of its rainforests and nearly 50% of all forests in the last 200 years, and our high rate of species extinction is one of the highest in the world.

Wild Turkey With Thanks is an opportunity for McConaughey and the award-winning and born-in-the-wild bourbon brand to support Australia’s devoted wilderness and wildlife preservation community.

“Australia has always had a special place in my heart. I lived there for a year out of high school and have worked there many times making movies. An original Australian initiation is its rugged beauty. Mother nature demands you engage with her.

“Whether it’s the outback, the Barrier Reef, or the farms on the Central Coast, I’ve enjoyed the natural beauties of Australia for years. And now I’m coming back to meet and celebrate the unwavering conviction of Aussies who work tirelessly to preserve and protect the beautiful wilderness and wildlife that is their own,” said Matthew McConaughey.

Nicole Stanners, marketing director of Wild Turkey’s parent brand, Campari Australia and New Zealand, said, “We’re delighted that Matthew will be coming to Australia to shine a light on the preservation of the Australian wilderness and take a moment to thank those who share our spirit of bold conviction. It’s important we do our bit to protect the wilderness because being closer to nature is a good way to connect with yourself and others.”

To launch Wild Turkey With Thanks in Australia, Matthew McConaughey and Wild Turkey have partnered with a remarkable Australian travel start-up, Unyoked, to design and launch an off-the-grid cabin that will encourage more Australians to reconnect with the wild.

McConaughey will be the design director on the construction of The Reserve by Wild Turkey x Unyoked, to ensure the cabin aligns to Wild Turkey’s unapologetic commitment to their craft, and history of doing things the right way for nearly 100 years.

A percentage of the proceeds generated from the cabin and $1 from every bottle of Longbranch sold in November and December will be donated to Unyoked’s charity partner, the Foundation for National Parks & Wildlife.

“Wild Turkey is inspired by the wild and believe it’s important to do its part in protecting it. Which is why we’re proud to support With Thanks and Unyoked’s charity partner and the great work that the Foundation for National Parks & Wildlife does to protect and preserve the Australian wilderness for future generations.

This will be the first step in a number of planned initiatives from Wild Turkey that will go towards conserving and protecting the environment,” said Stanners.

The cabin will be launched on 20 November in Sydney, following which it will be placed in a wilderness area of New South Wales and be made available to the public for bookings from early December.

Unyoked founders Chris and Cam Grant recently met McConaughey during the filming of Wild Turkey’s global content series, Talk Turkey, after he was inspired by their unwavering conviction to making the Australian wilderness accessible via their tiny-house cabins.

Unyoked is a ground breaking, innovative travel startup founded by the Australian twin brothers who were determined to provide respite and change the pace of life. The two explore and carve out meaningful, reflective spaces in nature through state-of-the-art cabins across Australia.

“We are exploring conviction. Why some never compromise to be the best and why some choose their own path where none have gone before”, said McConaughey.

Talk Turkey is connecting with groundbreakers and way-makers who, like the Russell family of distillers, have an uncompromising conviction to do what they do,” added McConaughey.

McConaughey has been the Creative Director for Wild Turkey since 2016. The relationship began upon the actor’s inaugural visit to the iconic Kentucky distillery, where he was introduced to the Russells – the Kentucky Bourbon Hall of Fame father and son Master Distiller team who have 101 years of Bourbon industry experience collectively.

McConaughey had an immediate connection with the Russells when he discovered Wild Turkey’s devotion to distilling Bourbon the right, unapologetic way. In 2018, McConaughey unveiled his own Bourbon: Wild Turkey Longbranch®, a rare small-batch Kentucky straight bourbon refined with Texas Mesquite. 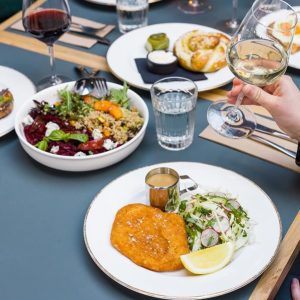 Theodore’s, a cosy ‘mixed business’ snack bar and refreshment service has opened in Brunswick, bringing a touch...
© Onya Magazine 2009 - 2021
Back to top