2010 Australian of the Year 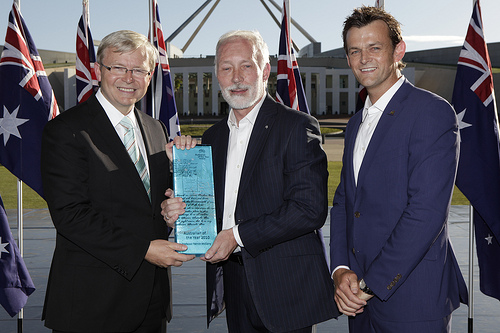 Youth mental health expert Professor Patrick McGorry, from the state of Victoria, has been named Australian of the Year 2010. Professor McGorry was presented with the award by the Prime Minister, The Hon Kevin Rudd MP and National Australia Day Council Chair Adam Gilchrist at a public event on the lawns of Parliament House in Canberra on Monday evening. 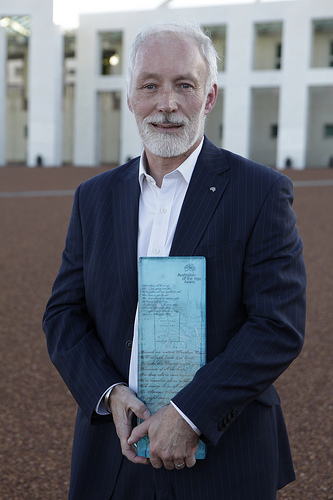 The award recognises Professor McGorry’s work in the mental health sector, paying particular attention to his achievements in improving the mental health among the youth community. The 57-year-old Executive Director of Orygen Youth Health (OYH) has demonstrated the importance of the early intervention and treatment of mental illness.

Professor McGorry is also the Director of the National Youth Mental Health Foundation (Headspace) and has contributed to the improvement of the mental health sector for over 25 years, both in Australia and around the world. He said he was thrilled with his award. “It’s a tremendous honour and as I’m learning and feeling, it’s a great responsibility I can foresee as well,” said Professor McGorry.

The Prime Minister paid tribute to the profound effect of Professor McGorry’s work, and thanked him for raising awareness of the major problem of youth mental illness among our community. “The incredible influence of his work, the number of young Australians and their families whose lives have been improved, and the value of his contribution to the nation cannot ever fully be measured,” said Mr Rudd. “With this award, we recognise that we have in Professor McGorry a leader whose drive, compassion, and commitment to understanding and treating youth mental illness has helped shaped not only lives, but our national approach to mental health intervention, prevention and treatment. He is truly a worthy recipient, and I congratulate him on being named Australian of the Year 2010 this evening.” 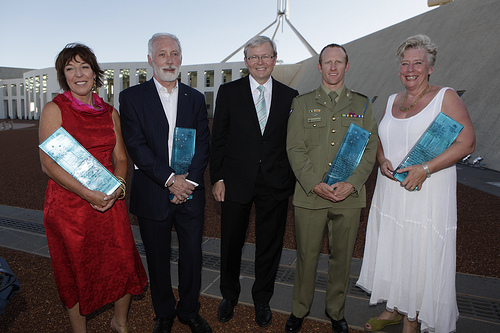 Among other recipients of the prestigious annual awards included popular chef Maggie Beer as the Senior Australian of the Year for her contribution as an Australian culinary icon. Trooper Mark Donaldson VC was named Young Australian of the Year following his Victoria Cross award in 2009, Australia’s highest military honour. Australia’s Local Hero title was awarded to food rescuer Ronni Kahn for her outstanding commitment to providing food supplies to charities. She runs the non-for-profit organisation OzHarvest that rescues unwanted food from restaurants, retailers, food outlets and corporate kitchens, which has accumulated over 600 food donors and delivers more than 110,000 meals each month to 163 charities in Sydney, Canberra and Wollongong. “Together we can make Australia an even better place. At OzHarvest we are dedicated to helping those in need and we could not do it without the help and support of so many. I am honoured and proud to receive this award,” said Ms Kahn. 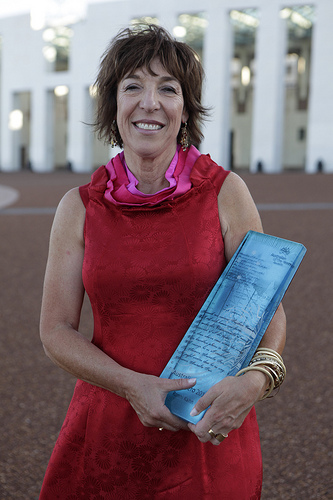 More than 2,500 nominations were received from the public for the 2010 awards and nominations are already being accepted for the Australian of the Year 2011. Nominate someone that makes you proud now at www.australianoftheyear.org.au

Australian of the Year Award Recipients:

Granting Professor McGorry, the Australian Of The Year Award should go a long way to highlighting the pending disaster and tragedy of mental ilness amongst our young people.
According to the MHCA [ Mental Health Council of Australia] the problem of our youths state of mental health will have dramatic effects on Australian social cohesion and ecconomic stability as we move towards 2020.

Loved this article Sharon- so glad there has been some recognition for Mental Health, as often this area does not get the support that it deserves. Loved the photos that went with your article too. Keep up the great work!

Brilliant article and the awards were extremely well-deserved this year, I believe.

By Sarah Kempson If an apple a day keeps the doctor away, what keeps the dentist, the optician and the specialist at bay?...
© Onya Magazine 2009 - 2021
Back to top