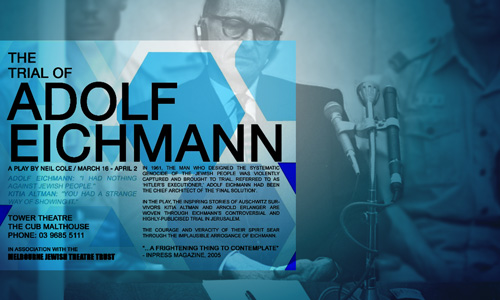 “It is said that I should have refused to be obedient. That is a consideration with hindsight. From my experience I know that the possibility, which was alleged only after the War, of opposing orders is a self-protective fairy tale. An individual could secretly slip away. But I was not one of those who thought that permissible.” – Adolf Eichmann.

The outcome of Neil Cole’s profoundly moving play, The Trial of Adolf Eichmann, is revealed within the opening monologue. On a blackened stage, Eichmann distills any speculation (for those unfamiliar with the historical facts on which the play is based) of his innocence. Rather than predicting twists, the audience is subsequently able to deal with the intricacies, ponder the questions of morality and humanity, and grapple with the notions of right versus wrong/good versus evil (of which Cole believes the Holocaust to be a metaphor) that are posited.

As well as being emotionally and intellectually involved within the action, the intimate design of the theatre also allows the audience to feel physically involved. We are in the courtroom. Our disgust and outrage is projected onto those on stage, who boo and hiss at all the right moments, and who ask the burning questions just as we are about to spit them into Eichmann’s face.

Although heavily based on the trial in Jerusalem, other historical events such as the Wannsee Conference, Kristallchet, and the Madagascar Proposal are placed under the spotlight. This historically/factually dense subject matter, however, is offset by the heart-wrenchingly raw and honest performances. Each actor embodies their role in totality – an especially daunting task for two of the actors, as the people that they portray were, on this night, sitting amongst the audience.

In a painfully/beautifully articulated manner, Cole, along with the cast, capture the crudity and cruelty of the Holocaust, and place it into the hearts and minds of the audience. To compliment this truthfulness, theatrical trickery and illusion are set aside – there are no wings for the actors to hide within, no stagehands to transform the set, and no interval to lighten the mood. It is all out in the open – history is on trial.

So, what do you think, is the guilt solely that of the political leaders, not that of their followers? How can mass murder become as banal an act as eating soup? Would you have secretly slipped away? Hold onto these questions, and bear them in mind whilst watching The Trial of Adolf Eichmann, at The Malthouse Theatre in Melbourne. But quick! Must end on the 2nd of April.

“Think about it, because it’s worth thinking about.” – Neil Cole.

A Guide To Australian Etiquette

A Guide To Australian Etiquette