The Odditorium Is The Cabaret Of Your Wildest Theatre Dreams

Sophie DeLightful’s sophomore season of The Odditorium returned to Midsumma Festival last night. Boasting a truly vaudevillian cast of circus, cabaret and burlesque performers, the show is sure to amuse and enthuse.

Co-producer The Quizzical Mr Jeff gives a performance that bamboozles the mind and amazes the eyes. A master manipulator, Mr Jeff combines his knack for magic with circus flair to present a physical comedy experience like you’ve never seen. Hats, hula hoops and a giant 6 foot-balloon are just some of Mr Jeff’s enchanting arsenal.

Ms Delightful’s stunning vocal range is true to cabaret form, and the story she tells through performance is not unlike dear Satine from Luhrmann’s Moulin Rouge. A woman surrounded by love, who has seen it ‘flitter in, and flutter out’ of her life; her rendition of Wicked Game by Chris Isaak is gorgeously heartbreaking. Accompaniment by award-winning aerialist Miss Amy May Rose as her love interestadds another dimension to the performance.

Compere extraordinaire Nat Lunatrick brings a playful energy to the stage; presenting a bevy of skills including juggling, dancing and puppeteering. A talented circus performer, Lunatrick showcases his knack for wearing many hats by, you guessed it, wearing (and performing with) many hats. Literally. His quick wit and comedic flair are put on display as he voices, and sticks his hand up an aristocratic British Lord made of felt who is very willing to bring you out of the audience for a bit of improvised theatre.

Yes, that’s right, this is an interactive show! Psych yourself up with a pre-show drink and allow the powers that be (the ‘sphere of obligation’) (read: a bouncy ball thrown into the audience) to get you out of your seat and damn well enjoying your night.

If you’re looking for a show that will ensnare the senses, entertain the eyes and confound the mind, then you’ve found it in The Odditorium. This is a stunningly simplistic show that will leave you laughing, crying and asking ‘how did he do that?!’

The Odditorium’s season is strictly limited, with five remaining performances. For an hour that is sure to surprise and delight, head to midsumma.org.au and grab your tickets! 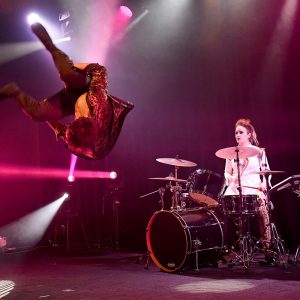 As part of Melbourne’s Midsumma Festival, REBEL rocks the stage from 30 January to 3 February at Melba Spiegeltent....
© Onya Magazine 2009 - 2020
Back to top