Tyrant with Sharks @ fortyfivedownstairs, 45 Flinders Lane Melbourne, on Thursday February the 18th, 2010, as a part of the Searchlight Festival.

A grungy theatre on Flinders Lane was the magnificently apt site for the second annual Searchlight Festival, one of Melbourne’s newest platforms for independent theatrical works. Steel pillars, exposed brick walls and blacked out windows, coupled with the odd noise from the burgeoning city upstairs gave flavour to the (literally) underground performance space of fortyfivedownstairs. It was the atmospheric parallel to the emergent and eclectic nature of the festival’s programme, which featured Tyrant With Sharks, a fresh and unseen ‘work in development reading’ written by Sandra Fiona Long. 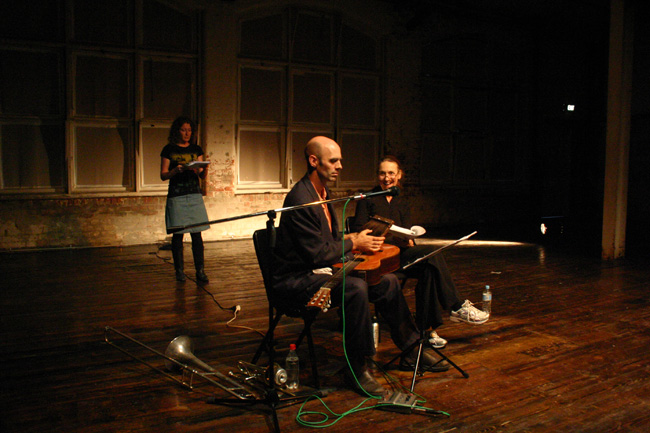 The predominantly seated trio actualising Tyrant With Sharks gave justice to a tenderly engaging and authentic tale of an Australian family’s dysfunctional lifespan. An ongoing barrage of audience sniggers was yielded as belief was easily suspended despite the script-in-hand reading. The performers often swapped between bit characters and, in the case of ‘Mum’, shunted between the lucid matriarch of yesteryear and the facility-bound, ‘YOU CUNT!’ yelling Mum of today. A permutation of such character-driven discourse and story narration, together with the transcendence of time, spawned a wry humour blighted by tragedy.

True to it’s billing as a rock’n’roll memoir, music peppered the entire reading, from mournful trumpets and acoustic guitar twangs to Bowie sing-alongs and Divinyls riffs. The device was a powerful conveyor of meaning and wide-ranging emotions, alongside the skillful use of a loop pedal (anyone who stomached the sickening loop of Mum’s guttural vomiting can verify this!). As the final scene closed with the fading layers of the script’s poignant children’s melody, the long pause between the actors’ mutually tentative smiles and the well-deserved applause suggested that the audience accepted the reading’s finale with trepidation. This was perhaps in anticipation of another verbal explosion of profanity, as Tyrant With Sharks certainly challenged the expectations of the audience who were the proverbial deer in the headlights of a vacillating script.

Using the barely-half filled theatre as a gauge, Searchlight Festival is a relatively anonymous vehicle for innovative performance works. It deserves far greater recognition for its labour in uncovering emerging talent and further texturising the already rich performing arts scene in Melbourne. The seeds sprouted by Searchlight Festival in challenging the poor life expectancy of new works will hopefully bloom into full fruition, encouraging the general public to embrace such theatrical dynamism. Similarly, the vanguard offerings of fortyfivedownstairs render it worthy of year-round support.

With this year’s boundary-pushing and wildly diverse works already played out, Searchlight Festival is sure to be a highlight on next year’s calendars. Put it on your list for 2011 and get the word out.

Melbourne’s gorgeous sunny Saturday afternoon bought the crowds to David Jones in the Bourke Street Mall to catch a glimpse...
© Onya Magazine 2009 - 2020
Back to top