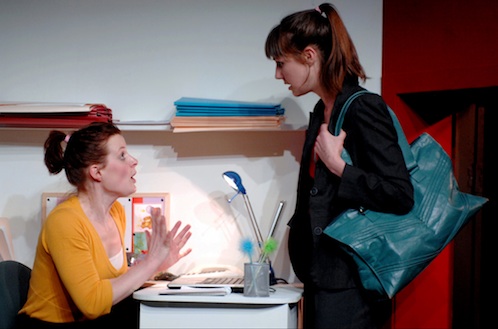 Melbourne’s leading independent theatre group, Red Stitch Theatre, hit the stage with an engrossing political drama that will have journalists squirming in their seats.

Set in a London tabloid newsroom in the wake of the of 2005 terrorist attacks in London, Steven Lally’s Oh Well Never Mind Bye explores the rise of ‘churnalism’ in today’s news rooms and the compromises journalists are forced to take in their pursuit  for a 24-hour news cycle.

It’s the 21st of July, 2005 and James Fisher’s news team are struggling to report the day’s events in time to meet their deadline.  Charlotte (Ella Caldwell) is a privileged and passionate Oxbridge graduate who takes her vocation all too seriously. Longing to be a true investigative reporter, she has been punished both personally and professionally for chasing the stories that her news editor is too fearful to pursue. Demoted to “monitoring the blog”, Charlotte takes out her frustrations, with much venom, on her colleagues Fin (Tim Ross) and George (Karen Sibbing). Fin has a strained – and I thought, somewhat underdeveloped –  relationship with his father, the editor of a Liverpool newspaper, and is battling day to day with ‘doing what he’s told’ rather than facing up to what he knows is right. George is a trainee reporter, succumbing all too easily to the copy-and-paste technique Charlotte so reviles.  And overseeing the three is James Fisher, the news editor behind the office door whose only objective is to print what the newspaper’s owners want to read, at whatever cost.

When news comes in on the wire that there has been a fatal shooting at Stockwell tube station, the tiny news room becomes a microcosm of the British media. Jean Charles de Menezes, an innocent Brazilian man was mistaken for a suicide bomber and shot dead.  What builds from this point on is a flurry of over-reliance on the internet, misrepresentation, misuse of semantics, and a cleverly woven and shocking sub-story of the shooting of a Palestinian boy at a peaceful protest, witnessed first-hand by Charlotte.

There are highs and lows; much of the drama coming from the character of Charlotte (expertly acted by Caldwell) and moments of humour and tenderness from Fin. The dialogue is smart and in the most part, true to life.  The weaknesses are to be found in Sibbing’s shaky accent (maddeningly unidentifiable) and the lack of development in the characters’ relationships.

But this is a significant piece of drama from Red Stitch. Written after extensive research and interviews with journalists, Lally has created a blackly comic but convincing drama that would leave any journalist feeling bleakly exposed.

After a weekend of near perfect spring weather, it seems Melbourne is finally coming to the party and allowing us to indulge...
© Onya Magazine 2009 - 2021
Back to top