Funk It Up About Nothing 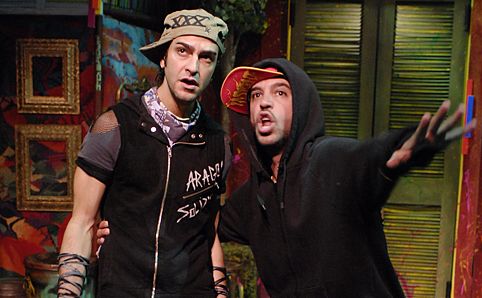 From the Chicago Shakespeare Theater, and Chicago’s Q Brothers, comes a version of Much Ado About Nothing that’s been thrown against a wall and graffitid over until the scripts read, ‘yo’ instead of ‘thou’. Funk it Up About Nothin’ is an hilarious contemporary adaptation of Much Ado, that takes the rhythm of Shakespeare’s words and cleverly appropriates his lines; the narrative keeps its premise, but the words are delivered with a fierce bass-line dropped by the performance company’s own DJ, Adrienne Sanchez. Most impressively, the entire performance is rapped, and Sanchez remains consistently rhythm-perfect, her queues for the beat-boxing, line-dueling actors are slipped in at exactly the right moment.

Since opening in America in 2008, the show has pleased crowds at the Edinburgh Festival, and seems to be witnessing a similar reception in Sydney. The high-energy performance received a standing ovation on Thursday night, and it’s no wonder; the actors remain verse-perfect, delivering tongue-knotting lines with a bounce of their lips, the burr of a bass, and a booty shake. Furthermore, all actors take on at least two starkly different roles, and each character remains distinctive; from backchatting Beatrice and her finger-waving sass, to pimpin’ Sheriff Dingleberry, or sickly-sweet protagonist, Hero, and her naive contemplations in a helium voice. The settings seem just as vibrant as the actors; the stage presents a multicoloured Sesame Street-like scene, wild with graffiti, yet the set has been given a wash-over with yellow grime, providing a foreboding sense of urban grit.

As a staunch fan of the original author and words, I’ll admit at times I found it difficult to warm to the replacement of Shakespeare’s wit for fast lines, clever contemporary slang-rhymes, and American slapstickish segues (for example, we briefly encounter a wedding planner and his two assistants, who only speak in ‘meep’s, and are dressed as though they have come straight from mardi gras to decorate the stage) we probably could have done without. I certainly didn’t expect such a severe renovation of the original author’s writings. The show’s consistent and rolling delivery of sharp lines is a gob smacking feat, however, and I’ll admit I considered, after laughing aloud at a few cheeky puns, that back in his era, Shakespeare received the same apprehension from his audiences for delivering modern revelation.

Funk it Up About Nothing runs for just over an hour, and will be showing at Carriageworks in Sydney until March 26th. If you’re in Melbourne and wanting to see the performance, the show will be giving both matinee and evening performances between Tuesday March 29th and Saturday April 2nd.

Onya Magazine Fashion Editor Sarah Kempson, and Beauty Writer Katie Found, team up to deliver the best of fashion and beauty...
© Onya Magazine 2009 - 2020
Back to top