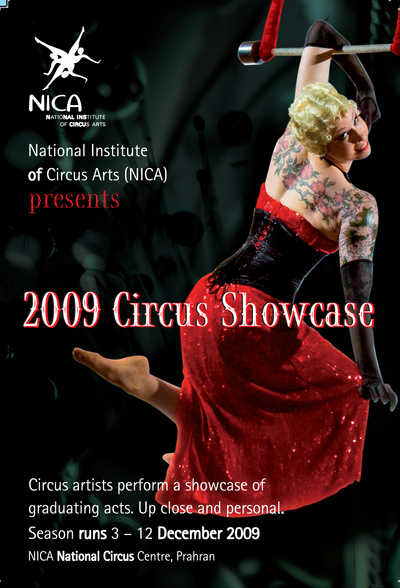 Running until December the 12th is the National Institute of Circus Arts (NICA) Graduate Showcase, in Prahran, Melbourne.

Directed by Megan Jones, the circus showcase is exactly that – an up close and personal showcase of all the varied talents of NICA’s 2009 graduates. The 90 minute show was filled with all the elements you’d expect from a circus showcase – the flying trapeze, hoop diving, vertical rope, hand balancing, hula hoops, German wheel, Russian handstands, contortion, aerial hoop, tissu, magic and my favourite, The Circus Fireman Duo.

What made the night special was the fact that it was a night of graduates – a night of young performers celebrating what they have studied. Each performer had a different strength, and each performer was granted solo time to display that strength. The graduates at NICA aren’t amateurs though – Billie Wilson-Coffey from Mullumbimby, NSW won Bronze at the 4th World Festival of Circus Arts in Moscow, in the duo act Memento. Hossein Baghalan Aval from Tehran, Iran has set a Guinness World Record from an act in which he balances on top of Farhad supported only by the tip of a dagger on the dagger below. Idris Stanton and Joshua Phillips (The Fireman Duo) from Goulburn, NSW, have performed at the Spiegeltent, Woodford Folk Festival, Auckland International Buskers Festival and Apollo Bay Music Festival.

With a live band supporting the evening, and a humourous story that lightly threads each performance together, the showcase was an exceptional night out. It was eye popping, exciting and, at times, fright inducing.

The 14 graduates that perform during the showcase are exceptionally talented – all the acts are entirely of the graduates own creation – under the umbrella of exotic entertainment. And they need to be supported – at this critical juncture in their studies, and their careers, they need to be seen – but even then, you may not believe how seriously awesome they are.

By Sarah Kempson It’s about this time every year when I start to panic about my New Years plans. New Year is one of those...
© Onya Magazine 2009 - 2020
Back to top