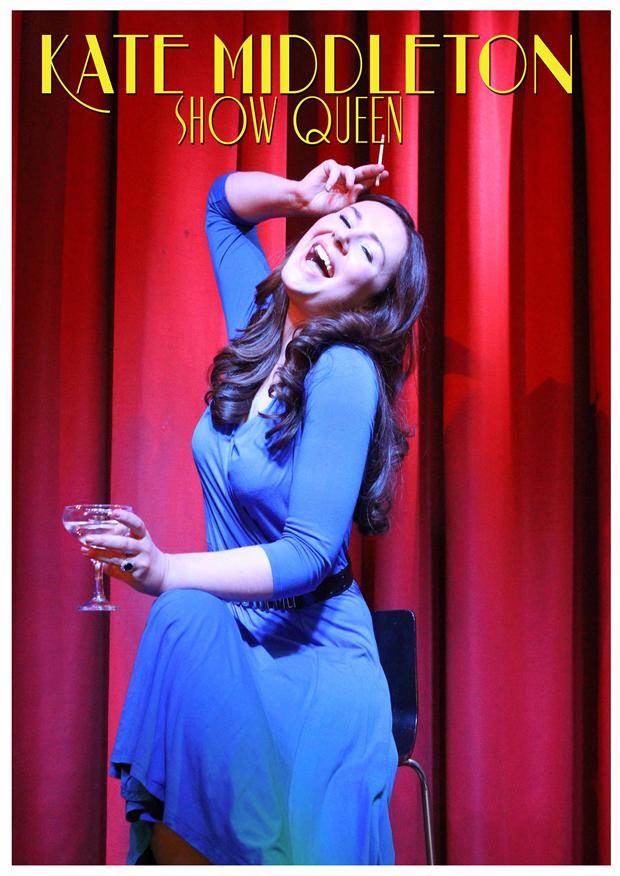 Katie Reddin-Clancy is performing her fabulous ‘Kate Middleton Show Queen’ at this year’s Melbourne Comedy Festival. Gaynor Alder chats with Kate, and finds out what it’s like to be Kate Middleton’s double.

Josh Pais from Sex and the City has described your show, What Is It Like To Be Kate Middleton, The Duchess of Cambridge: Cultural Icon? as “a delicious blend of spontaneity, unpredictability, and compassion.” Can you tell Melbourne audiences what else they can expect from your upcoming comedy cabaret show?

‘Kate Middleton Show Queen’ morphed into more of a character comedy show where I play five different women and do a stand up set. The show is about Kate Middleton’s double, KT. She has been working as her lookalike at parties and corporate gigs but then gets a promotion when The Palace ask her to do a trial shift to join, “the maternity leave pool of lookalikes.”

She calls on her friends for help: Xxora, a post op transsexual who runs KT’s father’s club Gracie’s, Sky her meditation guru from Essex, Scarlet a Hollywood actress and Ivy a ghost from Yorkshire. These women have their own dramas and are not much help at all, especially after copious amounts of vodka…

What’s it like being Kate Middleton’s double? Do people ever stop you in the street or have you been stalked by the papps?

I suppose a few people have said I am like her due to the look and the British accent but I think it’s all in the blow wave. There is no way I could have perfect hair like her everyday without a live-in hairdresser! I hear Kate has her hair done most days and got media attention when it wasn’t perfect once. That’s a lot of hours of her life in order to keep up her appearance for the nation, poor thing.

The Duchess really does have lookalikes. It is big business in the UK now, agency’s have up to 40 ‘Kate’s’ on their books and girls earn good money. I thought it was fascinating how people can buy into what they know is fake and wondered how the lookalikes must feel.

Are they fulfilled and proud, is it all just lighthearted fun or are they commercially savvy and just using what God gave them for some extra cash?  I once worked as Catherine Zeta Jones’s double on a film called ‘Death Defying Acts’ and found it infuriating to be doing all her walking away shots. That, I suppose, was the frustrated actress in me dying a little inside each time they said, ‘cut’ when my face was just coming into shot.

It was this type of feeling of always being the bridesmaid and never the bride that worked well for what I wanted to discuss through the lead character with regard to being 30ish, single and without a fulfilling career.

This seems to be very common in our society. There is a pandemic of hot single ladies with no menu of hot men. I hear there is a real statistic for this here in Australia of 5-1 or even higher (which is particularly sad as Aussie men are gorgeous)!

I know lots of women who are beautiful inside and out that can’t seem to find their match and I wonder, where have all the decent bachelors gone? I’ve even heard some people say, “we’ll have to wait for the first round of divorces” which was quite a sad, cynical thought. I wonder why more baby girls are being born than boys? I once heard it was the contraceptive pill filtered into the water system but I’ve no idea how that would work. Goodness knows. It certainly harkens back to a bygone era of men very much having lots of choice and women competing to attract their attention. It’s very Jane Austen.

I just worry that this choice might add to the breakdown of family units and marriages being parked after a few years. Women are also very competitive and some throw themselves at men whether they are taken or not. It certainly does nothing for the empowerment of women who have been treated poorly over the ages.

Larry Moss, an acting coach that I was introduced to here in Melbourne (who has changed my life) was giving a masterclass recently and said, “Men have always treated women badly, not respected them because they were brought up by mothers who weren’t respected, who took it out on their sons who grew up to be hostile to women. It’s a Machiavellian generational disaster.”  There wasn’t a dry eye in the house. 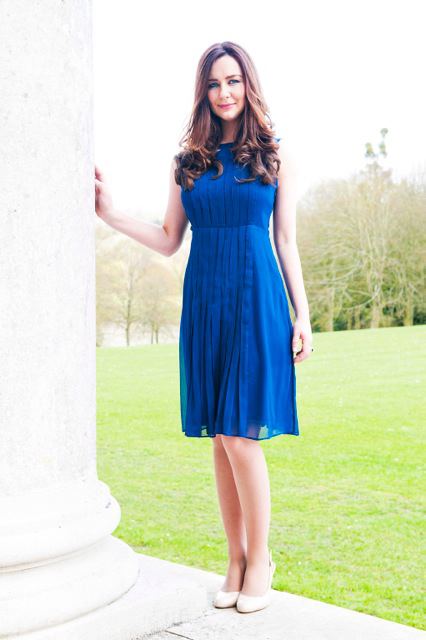 Have you had any funny experiences from people who have mistaken you for Kate?

The poster image was taken by a fabulous Melbourne photographer Charlie Brophy and when people see that they say I look very much like her. I walked up Chapel Street from Bouffant Delacroix (who did my hair and make up a la Kate) to Red Bennies for the shoot in “the blue dress” and signature nude court shoes. I did get some stares and car horns were beeped!

Do you enjoy the lifestyle of being on the road as a comedienne? What do you enjoy most about being part of comedy festivals?

I am new to life as a comedienne but really enjoy doing the various comedy nights in Melbourne and Adelaide. It is hard work: working creatively and then working to pay the bills as well. However, things that are worth it are hard work. I wanted evening work in a bar in order to have my days free to write.

This works really well for me. I did have a full time job for a year in London but I was always too tired in the evenings and too tempted to socialise on the weekends.  They say the best thing is to get up two hours earlier than normal and write before you go to work. It’s a real work ethic that you have to be very strict about.

I imagine being on the road could get quite lonely. You walk in on your own, have a one-on-one connection with 200 people and then catch your pumpkin home!

This will be my first Comedy Festival so I’m really excited. I think the best thing is without a doubt all the other acts. There is so much talent and bravery in the creation of these shows. It really is inspirational. I have a hit list of 10 that I’m dying to see. One of them will be a repeat from Adelaide: Tommy Bradson’s cabaret show, The Birthday Party Massacre. It really hit me, truly exceptional. I wasn’t surprised he won Best Cabaret.

As well as doing fabulous comedy, you are also an actress and a TV and radio presenter. Why did you make the transition into comedy?

I’ve only just started stand up comedy. Actually, my debut was at The Last Laugh Comedy Club upstairs at The Athenaeum Theatre here in Melbourne. I had worked at So Television and witnessed many great comedians on their show The Graham Norton Show. They also had a monthly live night at The Soho Theatre called So Comedy. It was here where I really got the bug and thought I wonder if I could do this?

My grandmother, Joan Reddin, who was my theatrical agent back in London, always told me comedy was my forte and I needed to come on the stage as different characters like I’d do when fooling around at home. Character sketch comedy I could understand but stand up seemed pretty terrifying. It’s funny, it took me going to the other side of the world to have the confidence to try stand up.

I suppose I thought ‘well no one knows me here so if I make a complete fool of myself it doesn’t matter’. In fact, I was really touched by my new Aussie friends who turned up to support me on my first gig from 16th Street Actor’s Studio, Red Bennies and Claypots.

Do you have any exciting projects in the pipeline?

I might take the show to Edinburgh and there is a film that I’m dying to write. I’ve been saying that for three years but I think having actually put pen to paper with the Kate show and nobody died, I shall try the film. I’d like to just write more stand up material too and see what London audiences think.

The two most difficult things about writing are starting and finishing. I’m such a procrastinator. I’ll have an immaculate house and have even done my hand washing before I sit down to write. I don’t think I’m alone on this one. I think it must have something to do with fear of failure or writer’s block.

I did a comedy-writing course at RMIT University with Tim Ferguson last year that was really inspirational, not to mention funny. Thanks to him when I finally sat down to write, words actually appeared, some even quite funny. A deadline is also key I think. The fact that I had paid my registration fee for Adelaide Fringe Festival was rather a huge propellant but I realise writing is actually rewriting so it takes much longer that you think.

And just for fun, a question for six year-old Katie. Besides being the future Queen of England, what do you want to be when you grow up?

A hairdresser. I used to put everyone’s hair in rollers including my fathers!

Kate Middleton Show Queen is playing at Red Bennies as part of the Melbourne International Comedy Festival on April 19th and 20th. For further information and to secure tickets, visit redbennies.com.

Leap of Faith: Circus in Motion

Discovering Our Own Backyard... 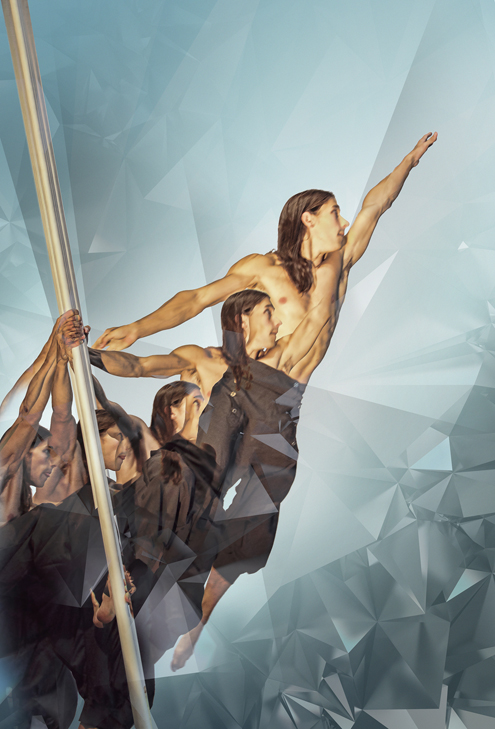 Leap of Faith: Circus in Motion

It’s performances such as the NICA’s latest production, Leap of Faith: Circus in Motion that sees Melbourne earn...
© Onya Magazine 2009 - 2021
Back to top