2020 was a pretty rough year for humanity. Australia had its worst bushfire season in years, we faced a global pandemic and Gal Gadot sang Imagine – all human tragedies.

I had a pretty rough year myself. I had a relapse of testicular cancer that I thought I had been cured of after being in remission for almost two years. It meant that during Melbourne’s second lockdown I was undergoing four months of high-dose chemotherapy at the Peter MacCallum Cancer Centre. Having said that, others had an even tougher lockdown. Some people had to homeschool their kids, which is objectively worse than cancer. When you get cancer your attitude is: “I’m going to beat this, I’m going to live through this” but when you have to teach Jayden algebra most people’s natural response is: “Kill me now. End the suffering, please.”

Before I go on any further, I have to point out that the doctors, nurses, food, cleaning and admin staff at Peter Mac are genuinely all world-class. I’ve been in so many hospitals since I was first diagnosed with testicular cancer in 2017, that I could (and should) be Yelp’s top-rated hospital reviewer. So believe me when I say this: the people at Peter Mac are the best in the business.

Anyway, back to my story. I finished up my treatment a bit over three months ago and it is hard to overstate just how much I’m enjoying getting back to my normal life and being on stage again. Even when I’m doing an awful gig to three people and a dog at the back of a Vietnamese restaurant bombing with new material, I’m still so happy to be doing it. The other week at the Adelaide Fringe I did an outdoor gig in the pouring wet. It was awful. I loved it.

I’ve been talking about my cancer diagnosis on stage since 2018 and as much as I’d rather not have any new material on the topic, it’s genuinely meaningful talking about it on stage (and it’s a great way to justify doing dick and ball jokes, which are a staple of all good comedy).

I’ve had so many people come up to me after shows to share their own personal cancer experience with me. The other day in Adelaide a young guy called Mike and his partner chatted to me after the show about how Mike also had testicular cancer and lost his right testicle (the same one as I did, funnily enough). We had a laugh about the benefits of losing a testicle, like finally being able to feel comfortable in skinny jeans. Back in 2019, at the Melbourne Comedy Festival two older ladies approached me after a show and told me they were breast cancer survivors and that being at my show was the first time they had laughed about their experience. Those chats mean more to me than getting a big laugh or a round of applause.

People say ‘laughter is the best medicine’ and though I personally found the chemo to be more effective, there’s certainly some truth to that. Being able to find humour in everything – no matter how awful – is so helpful. I literally believe that everything and anything can be funny, even cancer. In fact, especially cancer.

A Dozen Aussies Went To The Madness Of March 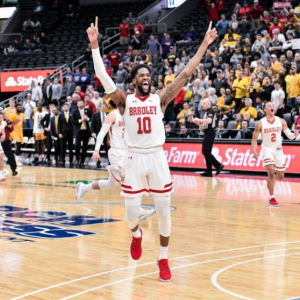 A Dozen Aussies Went To The Madness Of March

And then there was one. When the NCAA Men’s Basketball Tournament - better known as March Madness - got underway in mid-March,...
© Onya Magazine 2009 - 2021
Back to top