If you’re looking for a night of G-rated fun to take your mum to this Melbourne International Comedy Festival, definitely don’t head down to the Alex Theatre in St Kilda.

50 Shades! The Musical Parody made its Australian debut this week with a stellar line up of catchy tunes and saucy innuendo.

The show follows the hot and steamy relationship between Ana and Christian, through the eyes of three women in a book club.

You’ll recognise the narrative: our favourite hardware store worker, accompanied by her Inner Goddess, is swept off her feet by the successful, yet sullen millionaire and his uncouth sexual desires.

Get your giggle on in a night of explicit content and graphic choreography, and make sure to do it soon. 50 Shades! is here for a strictly limited season.

50 Shades! The Musical Parody is on now, until Sunday 7 April at The Alex Theatre on Fitzroy Street St Kilda.

Kayaking With Kids: The Right Age (And The Right Gear)

Sydney City Guide: Top 5 Things To Do In Stunning Sydney 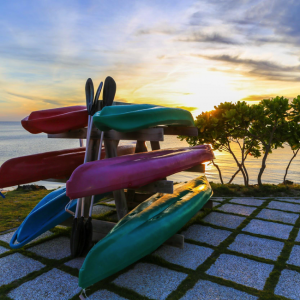 Kayaking With Kids: The Right Age (And The Right Gear)

If you're looking for a thrilling and adventurous outdoor activity you can take part in with you and your entire...
© Onya Magazine 2009 - 2021
Back to top