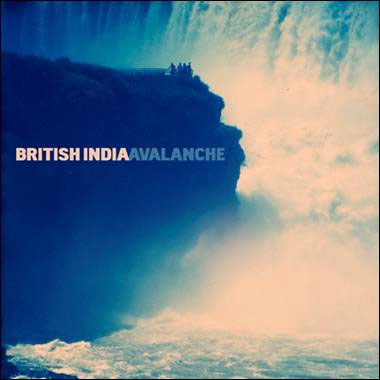 Melbourne’s British India are back with their third album, Avalanche. Following 2007’s Guillotine and 2008’s Thieves – which were characterised by a punk-rock sound, and lead singer Declan Melia’s shouty-vocals – this latest effort is stripped back, in more ways than one.

The sound has been stripped back to its most raw and real. British India are renowned for their live performances, typified by their frantic and frenetic energy, and on this album they have attempted to capture their fast-paced live sound.  The entire album runs for only 34 minutes, and the majority of songs clock in at three-and-a-half minutes. Opening track Safari establishes the wild landscape for the rest of the album: lo-fi, fuzzy garage-rock.

Avalanche has also stripped back the aggression evident on their previous releases, and it is a more emotionally vulnerable effort. If not because the lyrics themselves are more openly emotional – though they are – then because their delivery has softened somewhat. Melia’s shouty-vocals are both the reason British India stand-out in a sea of punk-rock Australian acts, and perhaps also the reason the band haven’t yet managed to break into the big-time (not all listeners like their lyrics shouted at them).  Avalanche doesn’t extinguish this tendency completely; but there are certainly a greater number of more melodic songs, with a more standard delivery. The difference can be seen on songs such as Beneath the Satellite and Anti-Gravity, which are both genuinely catchy pop-rock songs.

British India’s popularity might be due, in part, to their ability to give their fans what they want: anthems. Lead single Vanilla is one such song, and another example of perfectly executed garage grunge and pop, blending violence with vulnerability.

Avalanche may not knock you to the ground with its brilliance – but it might well sweep you off your feet with its softer, stripped-back side.

Don't Get SAD This Winter

This is a range for true nature lovers, with each product containing a veritable garden of ingredients. The name says it all – the company...
© Onya Magazine 2009 - 2021
Back to top