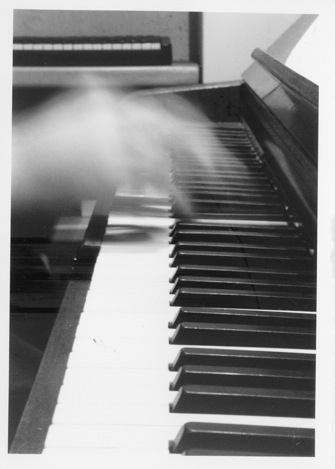 The trio are yet to don a collective title, but pianist Alexander Nettelbeck, double bassist Jonathan Zion, and drummer Alon Ilsar are certain to make a name for themselves if their concerts continue as strongly as their maiden performance, at Forty Five Downstairs on Flinders Lane.

Opening the evening on a unison pedal point, the atmosphere was a synergy of simple sound and the audience’s warm silence. The ensemble’s repeated note grew and gently sprouted rhythms and harmonies, until all three bodies on the floor pedalled and swayed, drummed, nodded and pizzicatoed in one great, breathing body of music. Rather than this communication between musicians alienate the audience, it drew us in with a gravity stronger and more inexplicable than any physics. Alon Ilsar’s sticks danced about his kit in an easy, fluid motion, and Alexander Nettelbeck appeared to almost knead the piano’s keys – his fingers so rounded and accustomed to producing a strong yet ambient tone that they were hardly seen to be moving whilst his hands floated along the ivories.

The trio’s contrast between ambient and upbeat repertoire was balanced wonderfully throughout the evening’s program. In great taste, the night’s smooth opening was followed by a lively, swaggering, and quintessentially jazzy piece, featuring the crushed chords, walking bass and syncopated cymbal any jazz enthusiast anticipates in an upbeat number. Most impressive was Jonathan Zion’s outstanding fingerboard work, never seeming to miss an opportunity to pull an improvised and captivating solo from somewhere between his strings.

Further complimenting the evening’s delicious soup of sound were the peeling brick walls, glasses of wine, and mellow lighting provided by Forty Five Downstairs. Funded entirely by donations from the private sector, the performance space only enhanced what was an intimate evening with three gentleman and their exciting sound.

Beautiful use of words…:)