From The Makers Of SÉANCE, FLIGHT Comes To Melbourne

FLIGHT is the unnerving new sound, movement and sensory deprivation installation (broken up by the screams of its passengers) running until December 8 in Queensbridge Square, Southbank.

Following the success of the hit experience, SÉANCE, the DARKFIELD Series has returned to Melbourne with its second installation: FLIGHT.

For those unfamiliar, the DARKFIELD series is a collection of theatrical experiences each taking place in complete darkness, inside a bespoke set in a 40ft shipping container.

Where SÉANCE explored the paranormal, FLIGHT jolts its audience into a parallel reality – a multi-sensory, multi-universal journey in complete darkness. As bags are stowed overhead and cabin doors close, the passengers are likened to Schrödinger’s cat in a performance that is literally and figuratively very dark. In the unlikely event of a sudden loss of cabin pressure, alternative scenarios will be provided.

I absolutely loved every second on FLIGHT – despite not unclenching my fists for the approximately 20 minutes I was in there, despite a few jumps out of my seat, despite being separated from my friends and sat next to random strangers. Leaving the experience, I found myself remarking, ‘that wasn’t as scary as I thought’ – and it wasn’t. It was unnerving, unsettling and completely unique; but not petrifying. More than anything, the overarching message from the experience (and there is one) has stayed with me – and I kind of think that’s the point.

UK-based creative directors and DARKFIELD founders, Glen Neath and David Rosenberg, use a combination of binaural (3D) sound, movement and sensory deprivation to manipulate the audience’s sense of reality in the darkness.

“In most instances vision is our leading perception. In the dark, we can start with the sound and create environments and characters and to allow the audience to create visuals for themselves, in their imaginations,” explains David Rosenberg.

Produced in Australia by Realscape Productions, the FLIGHT container has been fitted with the seats, windows and overhead cabins from the economy section of a real commercial plane.

There are many worlds in which this plane lands safely…and if you’ve been you know what I mean by that.

Tickets are $25 + BF from darkfield.com.au/tickets. 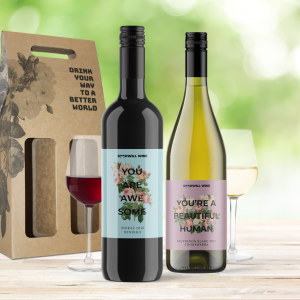 Meet Founder and CEO of social enterprise Goodwill Wine, David Laity. David is a Black Saturday bushfire survivor who has re-built...
© Onya Magazine 2009 - 2021
Back to top