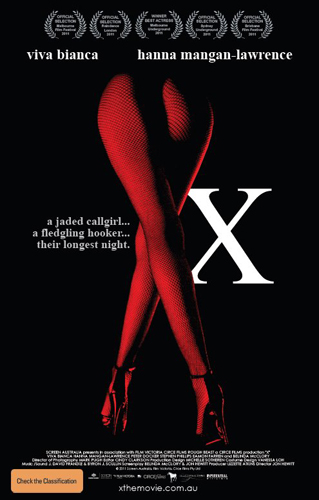 The opening scene of risqué new Australian film X features a beautiful woman (Viva Bianca, Spartacus: Blood and Sand) in the driver’s seat of a car cruising through the upper-class suburbs of Sydney. She’s wearing a beautiful dress, her hair in a cute brunette bob and she is listening to French lessons on her car stereo system as she makes her way to something, somewhere. Perhaps she’s joining her fellow socialites for brunch, or attending an important business meeting. This being a Jon Hewitt (Bloodlust) film, you should already know that was never going to be the case. Instead, she’s on her way to perform for a group of wealthy clientele by removing her clothes and having sex with the equally good looking Giles (Darren Moss in an eye-opening debut) right there on the living room table in a room filled with antique furniture and expensive paintings on the wall. And all while the female voyeurs sip daintily from champagne flutes.

It’s a moment that recalls the equally confronting Sleeping Beauty, but that is most assuredly where the comparisons end. Where Julia Leigh’s quiet, ornate filmed explored the curious fringes of sexual lust amidst high society, Hewitt’s brash and – quite frankly – bonkers movie takes a much harsher look at the seedy world of King’s Cross in Sydney. The beautiful woman from this opening scene is Holly, a high-class escort with dreams of kissing the business goodbye from her first class seat to Paris. She’s going to “reinvent herself”, but much like the way her real blonde locks unravel when she takes off her posh wig, so to do all of her best laid plans. Suckered into one last job – “couple of hours, tops, good money!” – she quickly finds herself embroiled in a chase across the city, locked arm-in-arm (quite literally, at one point, since they’re handcuffed) with a fledgling prostitute named Shay (Hanna Mangan-Lawrence, Lucky Country) as they try to escape the drug peddlers, dirty cops, violent thugs and mean tricks that crawl throughout the night time streets. 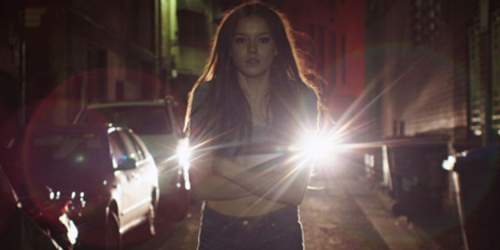 Bathed in the sordid colours of neon, cinematographer Mark Pugh has made the Sydney streets of X look like an even sleazier version of Las Vegas. As the screen is covered in bold reds, fluffy pinks and deep blacks, Pugh makes great use of imagery like taxi headlights on a wet road or buzzing neon fluorescents that line a local strip club. One particularly wonderful sight gag sees the walls of a rich high-rise apartment building painted the same colour as those of the dingy hostel rented out to drug users and hookers by the hour. Cindy Clarkson’s editing is electric and makes the tense 85-minute run time fly by to the pulsating rhythm of David Franzke and Byron Joel Scullin’s music.

I’m very surprised to see that X has been rated MA15+, because I could have sworn the plentiful nudity and abrasive violence would have been enough to earn it the distinction of an R18+. By the ten minute mark we have already been shown multiple naked bodies (male and female) that all the other body parts that get, pardon the pun, thrust in our faces throughout the rest of the movie barely register a raised eyebrow. The violence, however, never quite earns that desensitised feeling, but its oozing exploitative graphicness at times does elicit laughs as much as it does gasps of shock.

A film like this rarely lives or dies on the strength of its actors, but Viva Bianca still manages to hit a winner with her performance. Her absolutely stunning looks are just the surface and Bianca buries deeper into the character – far deeper, I suspect, than the screenplay by Hewitt and Belinda McClory ever required – finding captivating edges to this desperate woman. Shay is a character more likely to offer a homeless girl some McDonalds just to make a friend than she is steal from somebody for whatever spare bucks she can find and Mangan-Lawrence has the right amount of naivety and teenage spunk to make it work. The men fare worse, but given we’re meant to hate every ounce of their slimy beings I don’t think it matters too much. 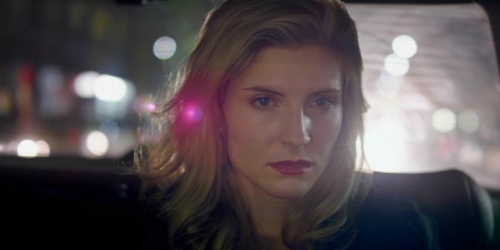 X most certainly won’t be for everyone, but I found myself enjoying every second of its slick, bordering on camp, nature. It’s one of the most alive and confident genre titles to come out of this country in quite some time and if, as the old saying goes, x marks the spot of treasure then X is the gaudy jewels found within.

X is in limited release from the 24th of November through Potential Films.

Bell Shakespeare’s Stripped Back Julius Caesar - Minimalist, but By No Means Reduced 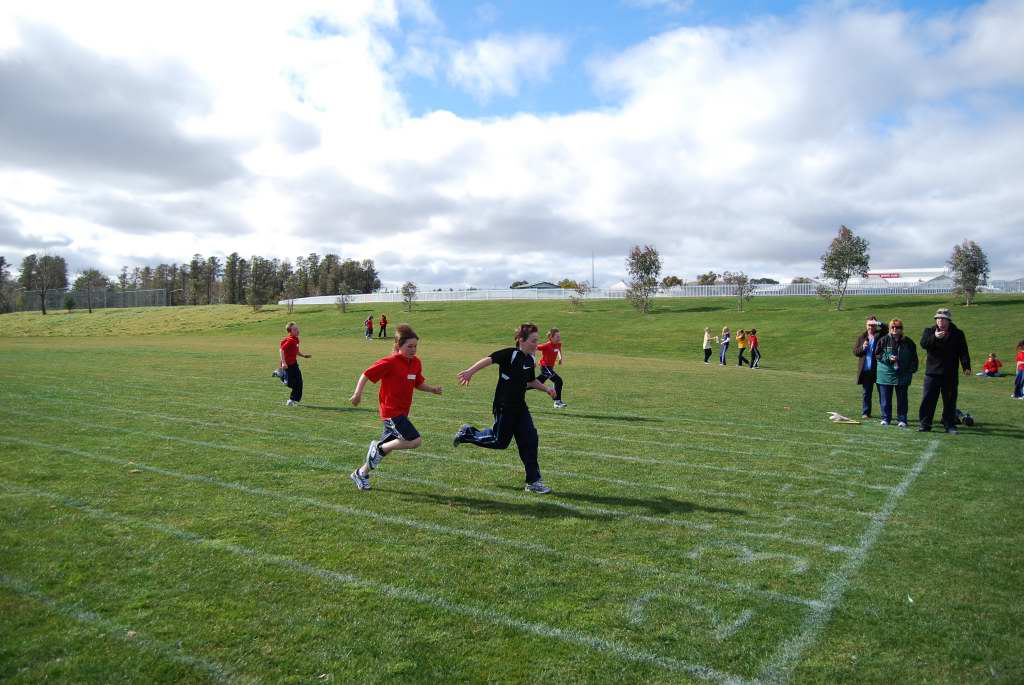 There were two types of kids at my primary school – well three, if you count the Eames family, who bread like rabbits – those...
© Onya Magazine 2009 - 2020
Back to top