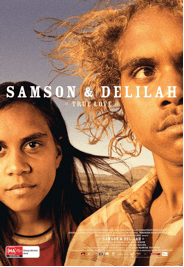 Named as the best Australian film this year, if not ever, Samson and Delilah is being hailed as the leading light in an Australian cinematic renaissance. The attention and Camera D’or given to Warwick Thornton and his film is well deserved. It is always satisfying to see a film achieve acclaim for actually being good, not just because it is home-grown. With so much being written and spoken about Samson and Delilah, it is surprising how little is actually being said about the subject matter. The film seems small and insulated, but it is hugely political and a credit to Thornton to be able to reach a wide Australian audience and get the message out.

Recent reviews have labelled the film as ‘tough’, but the same reviews are also accompanied by ideas of redemption and words like ‘hopeful’. Without wanting to be the pessimist in the room, the glass in Samson and Delilah isn’t half full – the glass is empty. In fact, you have no glass and liquid is a thing of the past. Samson and Delilah will (should) leave you feeling physically drained and guilt-ridden. It is no secret that the acting of the two young leads is mesmerising. Samson (Rowan McNamara) and Delilah (Marissa Gibson) are trapped by their routines of endless time. Life in their small community in Central Australia is oppressively slow, and quiet.

Whilst Samson is reliant on substances to fill this void, Delilah is heavily relied upon to care for her ailing grandmother. Beautifully shot images are accompanied by a cleverly ordered soundtrack that borders on mood-altering. Especially impressive is the opening 20 minutes of the film. Rowan McNamara has a stunning introductory scene, which he upstages later in the film when he dances like he knows someone is watching.

The bleakness of this largely dialogue-free film is more far-reaching than its narrative story. The teenagers of the film’s title have been let down by three of the ultimate cons for Indigenous Australians. Firstly, the deceitful contract of Commerce; highlighted in the Indigenous art trade whereby the producers receive a pittance for their work and their stories, whilst art dealers make a killing in a market of apparently culturally motivated purchases. This swindle is cleverly intertwined with Delilah’s story. Secondly, the promise of Religion; Christianity, historically complicit in the Stolen Generation, lets down Delilah when she is at her most vulnerable. Finally, the guarantee of urban living, seen as Alice Springs in the film, which appears to offer Samson and Delilah a chance at anonymity. In fact it makes them invisible, allowing people to ignore, dismiss or harm them with impunity. 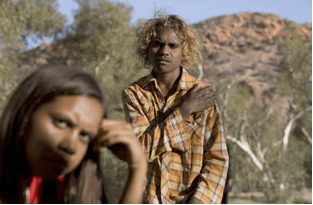 A good film should resonate with you once you have left the cinema. Samson and Delilah should make you question your own culpability; would I have helped Delilah or Samson when they were most at need? You could mollify your guilt, by assuring yourself that you wouldn’t have overlooked a bruised and distressed Delilah like your counterparts in the film.

It would be worrying if the act of simply watching this film was seen as enough, as if being a spectator was making a contribution. Samson and Delilah is creating debate, and that debate is about Australian cinema, not about the film’s issues. Are we going to continue to hang dot paintings on our walls without asking where they come from?

Samson and Delilah is showing at cinemas around Australia. Check out the official website for more information and behind the scenes footage.

Nice review, Beth. I thought a major strength of the film is that it does NOT induce guilt in a white anglo audience. In fact, the film is perhaps as critical of black society as white. It’s more about introducing a totally different way of life to us, in our own country. If that makes us feel uncomfortable, that’s probably a good thing. But there’s no easy solutions. How to fix the problem? I don’t know and I don’t know if anyone else does either. Sure, we want to ameliorate living conditions, but don’t we also want to preserve the culture(s)? It’s a difficult balance.

I haven’t seen this film but it’s the next one on my list. Brilliant review Beth. You raise some very interesting points and I particularly love your last sentence and question. Poignant.