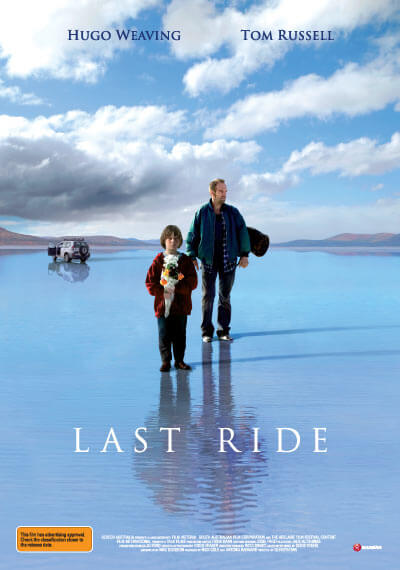 Australians have a particular affinity for the road and the Outback. We celebrate our car culture, while the more mythical qualities of the bush reside deep within our national consciousness.  Leitmotivs within Australian cinema, the Outback and the long road that takes you there are so often captured for their unique beauty as well as their disquieting danger.

Director Glendyn Ivin continues this cinematic connection in the beautiful and bleak Last Ride. Screenwriter Mac Gudgeon has adapted Denise Young’s novel, which sees the simple story of a father and son on the run belying a most complex and heart-wrenching tale of love, loss and loyalty.

Kev and Chook take to the road after an untold incident involving their friend, Max. After the fate of Max is revealed, the pair go bush in what becomes a harrowing rite of passage for the softly spoken Chook. The father and son relationship is examined under the most pressing circumstances; light and laughter so disturbingly interchangeable with rage and fear.

To which end the performances are quite remarkable. Hugo Weaving completely embodies the unwanted and self-proclaimed ‘mongrel’ Kev, who is retracing the steps of his own father in more ways than one. While newcomer Tom Russell brings a wonderful balance of innocence and maturity to Chook. Russell’s wide and worldly eyes are particularly striking, and in one grocery store scene, they’re downright chilling. Anita Hegh also gives a memorable performance as Maryanne. Her sympathy and wariness of the pair is well portrayed and her scene in the bathroom with Chook stays with you throughout the film, as both a glimpse of hope and a portent of things to come.

The Australian landscape is assuredly a dominant character, sublimely shot by cinematographer Greig Fraser. South Australia provided the beautiful locations and all seem to speak as much to the emotional as the physical landscape of the story. The eerie salt lake seen in the poster, Lake Gairdner, is certainly used to that effect. Moreover Fraser’s camerawork and especially his use of focus so keenly unites and divides Kev, Chook and Max from the landscape and from each other. 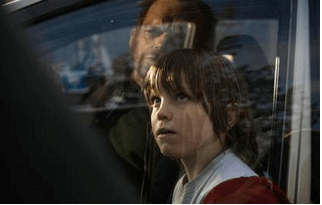 Kev and Cook: the ties that bind.

There’s a devastating inevitability to Last Ride. The tagline dares to ask, “Are some bonds meant to be broken?” And thus the film so accurately conveys Kev’s manifest disconnection with society and, at times, his son, that his fate seems fairly sealed. Chook on the other hand transforms during this ride. At first a quiet and tender child, the road, the bush and his father shape him into a young man grappling with the ultimate decision.

Last Ride is a slow and masterful film. This debut feature by Ivin is a confident next step after his 2003 Palme d’Or winning short Cracker Bag. And while the Australian landscape plays such a central role in the film, ultimately this tragic story of father and son is universal; where platitudes fail and happiness is as bright and fleeting as sparklers crackling against the evening sky.

Last Ride will be released nation wide on July 2nd, 2009. You can catch an early screening of it on Sunday June 7th at 4.30pm at The State Theatre, Sydney as a part of the Sydney Film Festival.

I love seeing the australian landscape in film.
The movie sounds very interesting, I look forward to seeing it

Good to see some interest for this film. I’d love to hear what you two think about it!

By Beth Wilson Named as the best Australian film this year, if not ever, Samson and Delilah is being hailed as the leading...
© Onya Magazine 2009 - 2021
Back to top