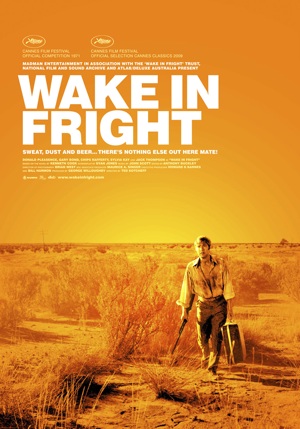 What’s dirty, sweaty, enthralling, dangerous, thrilling and covered in the orange haze of the desert? That would be Ted Kotcheff’s seminal Australian outback thriller Wake in Fright. A film of myth and legend within the film buff’s landscape for nearly 40 years since its premiere in 1971. Hailed by audiences and even a young Martin Scorsese at the Cannes Film Festival before screening in America and Britain. It was ripped to shreds by Aussie audiences – the miniscule amount of audiences that actually went – and since then the original prints went missing with the film to only ever pop up occasionally on late night television as presented by Bill Collins. The film was thought lost forever and a sad casualty of this country’s capacity for cultural cringe.

Along comes 2002 when out of the blue in Pittsburgh, Pennsylvania, a print is found in a bin marked for destruction. And now, 7 years of hard-duty restoration later – a full 38 years after the film first premiered to audiences – Wake in Fright has returned and has finally received the rapturous hometown applause that should have greeted it in 1971. Re-released into theatres in June 2009 to critical hosannas – some venturing to call it the greatest Australian film ever made – and box-office dollars.

What is it about this film, directed by a Canadian and starring a Brit, that has left such a mark on this country’s film landscape? As a nation of cultural cringers we do not like to see real representations of ourselves on the screen, so when Wake in Fright came along it was a shock. It showed savages and barbarians, men turned into beasts by this very land that we call Australia and the idea of mateship. In the years before and after the idea of the “lovable larrikin” had run rampant and the outback was an exotic place that nobody thought twice about. And yet Kotcheff’s direction was not afraid to show what Kenneth Cook’s book described. A culture of alcoholism and violence based on the idea of masculinity that is as prevalent today as it was then.

It was surely not just the violence and the language that shocked audiences, though. It was the overt reference to promiscuity as well as brutal scenes of kangaroos being hunted and even one scene that implies gay rape. And the idea that a British man could find the Australian locals of this backwater outback town – affectionately called “The Yabba” by the town’s people – such scum, was probably too much to handle. It’s meant to be us shucking off the restraints of Commonwealth rule, not them shaking their heads at us. The implications that this dangerous personality was made out of response to big city folks who speak in prim British accents cut too close to home and the film subsequently vanished from cinemas, and seemingly off the face of the Earth until that day in Pittsburgh.

The film revolves, quite simply, around a school teacher (Gary Bond) trying to make it from the outback town that the education board stuck him in and get to Sydney to be with his girlfriend for the holidays. However, upon a stopover he becomes embroiled in gambling and drinking and loses his money, meaning he must spend his weekend in The Yabba, a town where nobody is afraid of a beer – or twelve – and he is forced to do things he never thought possible. Also starring Chips Rafferty, in his final performance, as a local policeman with a cheery demeanour that hides signs of sinister deeds, Donald Pleasance as a friendly stranger, and Jack Thompson as a young chap with a penchant for kangaroo hunts in the dead of night.

Wake in Fright is filled with dark humour, horrific brutality and a keen sense of ear for dialogue. As this teacher’s life spirals so rapidly out of control, the film takes on surreal undertones and by the time the film’s final moments play out this man’s exhaustion will be mirrored in your own. It’s one crazy journey into The Yabba. It is a stunning achievement of a film and one that this DVD and Blu Ray release will make impossible to forget. If you have any interest whatsoever in discovering the true classics of Australian cinema, there are far worse places you could start than with Wake in Fright.

Wake in Fright (Madman) is available on DVD and Blu Ray now.

When The Rain Stops Falling

By Lin Tan If the rehearsed public reading of Michael Gurr’s new screenplay, Mercy, is anything to go by, then all signs...
© Onya Magazine 2009 - 2020
Back to top