It’s Always The Quiet Ones 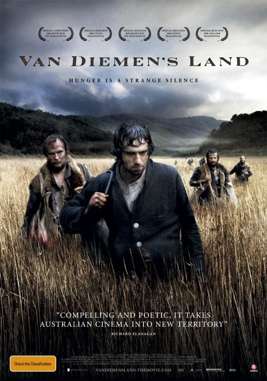 From the very first moment that Van Diemen’s Land starts you know that you are in for a disturbing ride. Underlying the lamenting score is an unpleasant piercing sound; this film is an assault on the senses. You hear the wind brushing through the trees, the rushing water, every twig snap and every bone crunch – the effect is unnerving. There have been stories buzzing around the Internet about audience members vomiting or fainting whilst watching this film, and it is not just publicity hype. There is definitely something physically unsettling about the film – not simply the storyline, but the whole approach taken to tell the story.

The film follows the true story of the escape of eight men from a harsh penal colony in the remotest part of Tasmania. Taking up the convicts’ story on the day they escape from Macquarie Harbour, we follow them until there is only one left alive – the infamous Alexander Pearce. Interestingly, Pearce’s story has been the topic of three films recently – the made for TV movie The Last Confession of Alexander Pearce, the modern-day schlock-horror Dying Breed and lastly Van Diemen’s Land – all hoping to tell part of the story of the man who was involved in the killing and eating of six men.

The story has legend status in Tasmania, with the role played by Alexander Pearce and his predilection for human flesh increasingly pushed into the realm of horror film monster. Van Diemen’s Land’s purpose seems to be to try and reel the story back, taking a more realist approach with more understanding than the taboo cannibalism storyline is usually given. This film takes an even-handed look at the convict’s journey and views the cannibalism as an action more due to necessity than unnatural intent.

The Pearce (Oscar Redding) presented in Van Diemen’s Land is quiet and awkward, only able to keep company with his more socially easy friend Dalton (Mark Leonard Winter). Attention is given to all of the convicts, with Pearce’s role not being singled out for special treatment. The ensemble cast are great, with nice nuances of English, Irish and Scottish rivalries worked into the script.

The film is best described as bleak. The colours are muted greys, blues and blacks. The landscape is reinterpreted in front of our eyes – no longer beautiful forests and snow-capped mountains, with meandering rivers; the terrain is cruel and devious. With rows and rows of trees, confusing in their multitude and treacherous rivers, it is nature that is the prison on this remote island. As the film progresses it is hard to work out the time frame as the men begin to suffer delirium from hunger and exhaustion, making their journey seem all the more hopeless. 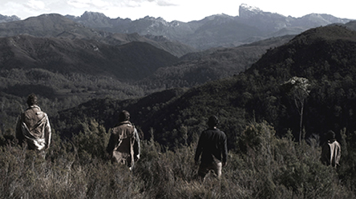 The director, Jonathan auf def Heide, plays a great game of hide and seek with the audience. So much is not shown but implied with sounds (do not buy popcorn to take into this film), making what is shown all the more terrible and shocking.

The questions that haunt you long after the film finishes are concerned with the perversion of human nature. How do you start with a man who is transported from Ireland to Australia for stealing shoes, and end with a mass murderer who has a taste for flesh? The film leaves you questioning the conditions of the penal colony and the issue of institutionalisation.

Although there is something eerily poetic about this film, the filmmakers reluctance to pass judgement on the men leaves the story somewhat lacking in its examination. It would have been more satisfying to have seen more of the convicts’ conditions in Macquarie Harbour before they escaped; it is a pity this hasn’t been worked into the script. Van Diemen’s Land is so focused on the film being an experience that we are not really given any insight into this revisionist version of Alexander Pearce.

Van Diemen’s Land is out now.