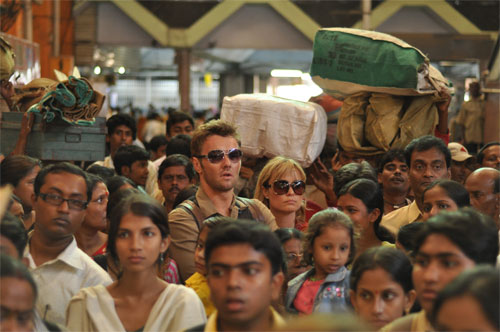 An affluent white couple arrives in slum-ridden India and within hours the airline has lost the wife’s luggage and the husband has gotten sick from drinking the water. These may be scenarios you would find in a light-hearted fish out of water comedy (it’s half the plot of Sex and the City 2, actually), but in this case they are the starting points to Claire McCarthy’s mature and poignant tale of lives affected by adoption in The Waiting City. McCarthy had previously worked as a volunteer in Calcutta and has used this life-changing experience as the basis for this her second feature film. Starring Radha Mitchell and Joel Edgerton, both of whom returned from successful American careers to make this small, some might say “intimate”, exploration of a failing relationship teetering on the brink of collapse.

Mitchell and Edgerton play Fiona and Ben, a married couple who have made their way to India to adopt a child named Lakshmi. Internal politics within the adoption agency extends their visit, which forces these two people to confront the issues in their marriage as well as their reasons behind wanting to adopt a child in the first place. She is a busy lawyer, laptop keyboard seemingly attached to her fingers, and he is a once-successful musician. They don’t appear to be a perfect couple, but perhaps that’s what makes their relationship work. The strains appear early; he thinks she’s working too much, she thinks he’s too concerned with having a religious experience than dealing with the real life issues of international adoption. 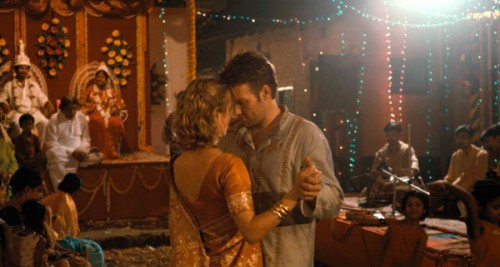 What makes the film work is that fractured chemistry between Mitchell and Edgerton. It feels like these two characters have true history that they have lived and breathed, rather than merely read about on a script page. Mitchell, also a producer of the film, hasn’t been this good since her work in the 1990s in Love and Other Catastrophes and High Art. Edgerton, too, has rarely been better as the lovable, but suitably damaged, Ben. Isabel Lucas appears as a spiritual musician from Ben’s past while Samrat Chakrabarti and Tillotama Shome appear as locals that cross paths with these busy westerners.

The film is a technical marvel, especially Denson Baker’s cinematography. The Waiting City is a visual feast and Baker floods the film’s frame with pillars of light and magical camerawork. It at times plays like an episode of The Amazing Race with its penchant for capturing glorious images amidst all the despair of the Indian slums, but as seen through the eyes of Fiona and Ben the images are appropriate. Music by Michael Yezerski and editing by Veronika Jenet are equally important and give The Waiting City an atmosphere that will linger with viewers for some time.

In the end, however, it is a success for director McCarthy who has written and directed this sublime production. She wrings true emotion out of simple moments that audiences will recognise. As the film marches towards its heartbreaking conclusion – be warned, tears may flow – there is the realisation that this is truly something special, something that will work its way through the viewers’ mind for a long time to come. It tugs at the heartstrings as well as proving to be a life-affirming and altogether beautiful film.

The Waiting City is now playing in cinemas nationally.

A great review! I really enjoyed this film and it has stayed in my mind for days since seeing it.

Your review has me wanting to experience it again.

This Floating World, a book-length poem, has been adapted for a forthcoming theatrical performance at The Wheeler Centre...
© Onya Magazine 2009 - 2020
Back to top