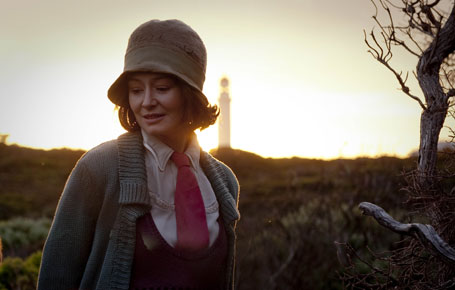 Shirley Barrett’s first feature film in 10 years – and only her second since winning the prestigious 1996 Camera d’Or in Cannes for Love Serenade – is a sad movie-going experience. Set on the island of South Solitary off the coast of NSW in the 1920s, Barrett’s film seems to be aiming for quirk, but turns out to be a dispiriting and deflating film. People constantly ask why the Australian film funding bodies give money to the filmmakers that they do – even in this year of successes like Animal Kingdom, Bran Nue Dae and Daybreakers – but if you need an example of the problem then South Solitary is it. It is an adequate-looking, nicely acted movie in which absolutely nothing of any interest happens for an audience of zero.

We first meet Miranda Otto’s Meredith arriving at South Solitary carrying an excessive wardrobe and a baby lamb. The island’s sole reason to be populated it would seem is the lighthouse that sits atop the rocky bluffs of South Solitary. Meredith has been hired as the new housekeeper, but she is greeted with hostility from the population of five. Even her uncle, one of the island’s three lighthouse keepers, treats her with contempt. Nothing of any interest happens here and moments of levity are rare.

Making matters worse – for the characters and the audience – the island is constantly hounded by harsh weather that lends the film a gray and overcast appearance despite the best efforts of cinematographer Anna Howard. Miranda Otto is a pleasant enough presence on screen but is capable of, and has been, far better. The blossoming romance between Otto’s Miranda and Marton Csokas’ Fleet characters is handled in a very offputting manner. He is an incredibly unappealing character and Csokas, an award winner for Romulus My Father and other better movies, isn’t given enough of a chance to make him more than a one-dimensional gruff. Audiences are supposed to be swept up in the romance of these two opposing people falling in love with each other, but it ends up being a chore. Any interest whatsoever in this tale went out the window the minute Rohan Nichol and Essie Davis’ characters depart the island after a scandalous incident.

By the end of this movie I felt glum and, despite its best efforts to remain light-hearted, thoroughly depressed. Meredith’s lamb, wearing a pink bonnet of course, is supposed to be a comedic relief, but even Barrett appears to lose interest with her. The film’s big climax involves characters being trapped inside the lighthouse during a storm, and that’s as exciting as it gets.

Unfortunately, what it all boils down to is the big question of just who this movie is made for. I can’t quite picture anyone actually enjoying this and it certainly isn’t powerful and potent enough to act as a compelling drama. It simply exists and that’s it. There is nothing here for audiences, even those who are willing to give Australian cinema a fighting chance amongst all the international fare that fills out cinemas with their bigger budgets and better marketing. Viewers will surely leave without having felt or been moved by anything. It’s a dull and lifeless movie that doesn’t have a place in the landscape of Australian cinema of 2010.

South Solitary will be screened in selected cinemas nationwide from July the 29th, 2010. Visit the website for more information.

Sketchbrooke: The Best Thing About Alleyways...

It’s Time For Some MOR…

Why do film critics always couch their personal opinion as objective fact?

Sketchbrooke: The Best Thing About Alleyways...

You can keep up to date with Brooke’s work via her online portfolio at sketchbrooke.com.
© Onya Magazine 2009 - 2021
Back to top