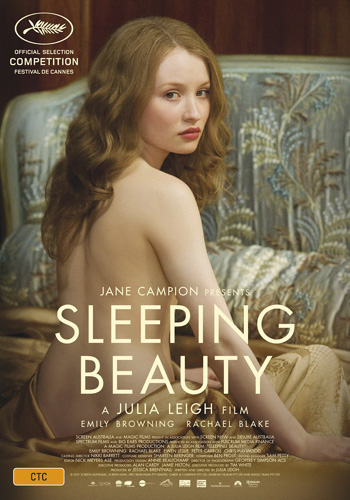 There comes a moment about two thirds of the way through author-turned-director Julia Leigh’s debut Sleeping Beauty where a character breaks the fourth wall and recites a lengthy monologue directly to camera. It’s a particularly intriguing and brave moment, in a film that is filled with intriguing and brave moments, that solidifies Leigh’s intention to completely ignore the fundamentals of cinema. She all but states with this scene late in Beauty’s proceedings that there will be no neat and tidy bows tied to this story of high class high creep prostitution. She’s been confounding the audience up until this point and there’s no way she’s about to stop just so we mere mortal filmgoers can walk out the cinema feeling as if we know what we just witnessed.

Let’s go to the start though, shall we?

Leigh opens her film with a blank screen and the sound of a latex glove being tightly yanked onto the hand of what we soon learn is a medical scientist. It’s an appropriate way to begin a movie that’s as clinical and almost procedural as this. We quickly meet Lucy, a university student played by waifish Emily Browning (Sucker Punch) who participates in medical experiments alongside jobs cleaning tables and working in the copy room of a firm to help pay the rent of her inner-suburban share-house. Responding to an ad in the classifieds, Lucy quickly finds herself indulging in a world of Kubrickian prostitution where she is she’s renamed “Sara”, wears skimpy lingerie and pours wine to rich old men at exclusive dinner parties where the other hostesses wear outfits that can only be called underwear in the loosest of ways. 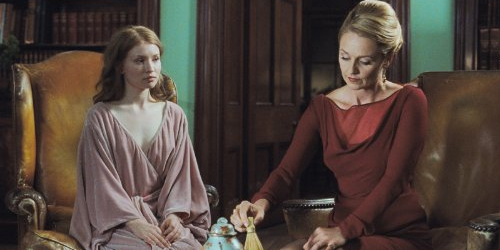 Leigh, working with cinematographer Geoffrey Simpson and production design by Annie Beauchamp, crafts her images in a very specific, ornate manner. Having taken inspiration from the aforementioned Kubrick (Eyes Wide Shut), as well as Michael Haneke (Funny Games), Luis Buñuel (The Discreet Charm of the Bourgeoisie) and Pier Paolo Pasolini (Salo) – not to mention a distinct similarity to recent Australian film, Ben Hackworth’s Corroboree – the film is delicately produced and designed, with the camera routinely sitting still amidst the icy settings; cold stately manors decorated with an assortment of bonsai plants, fancy painting frames and expensive furniture. Emily Browning, in a performance that truly warrants the adjective “brave”, is lensed in a way to maximise the glowing porcelain of her skin tone. Lucy/Sara’s brothel den mother, a stone cold Rachael Blake (Lantana), always appears with her hair exquisitely coiffed and her assortment of cardigans and sweaters always pressed to perfection. Sleeping Beauty is nothing if not sumptuously crafted.

However, its the sexual politics where audiences will surely find themselves butting heads with the most. Almost comical at times in its directness, Leigh – who also wrote the film’s screenplay – never shies away from sexually explicit imagery and dialogue. Every inch of Browning’s body is on display here and the way she is manhandled by a series of old male clientele in the film’s disturbing (and, yes, quite icky) final act will be a test for many. When one of Lucy’s co-workers informs her that her lipstick must match the colour of her genitals, it’s hard not to be both shocked and bemused. And as Blake’s commanding Clara informs her wealthy patrons that there is to be “no penetration”, I couldn’t help but feel she was talking about the impenetrable film they’re all partaking in. Danish provocateur Lars von Trier (Dogville) would be proud. 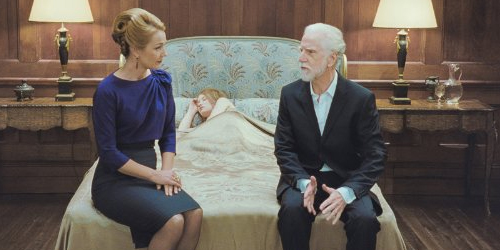 The film’s title comes from both the fairy tale and the method that Clara’s prostitutes are presented to men; as unconscious, lifeless beings that these men, perhaps, hope they can awaken with their sexual prowess. Sleeping Beauty was the first Australian film to compete for the prestigious Palme d’Or since Rolf de Heer’s Dance Me to My Song in 1998 – although it’s the first since Jane Campion’s Bright Star in 2009 if we include Australian co-productions – and its inclusion is sure to cause a higher level of scrutiny, even more than is usually assigned to Australian films in the current landscape.

Many will call it pretentious, slow and the exact kind of movie that Australian funding bodies shouldn’t be giving money to. While it’s hard to argue that Sleeping Beauty is very much a tough ask for audiences to swallow, the discussion it has elicited from critics and audiences (domestic and international alike) is reason enough for its existence. There are a multitude of theories that one could project onto Sleeping Beauty as to its meaning – and, in all fairness, Leigh does straddle the line between being “about” something and appearing to be about nothing at all – but while the movie trades in ambiguity and uncomfortable awkwardness, the often hypnotising trance it emits is a fascinating sight to witness.

If you make this sort of thing with the money from other people’s taxes, you shouldn’t be surprised when there is pressure on governments to reduce the amount spent on the arts.
This sort of self-indulgence should be done in private and paid for by the individuals concerned.

Altura JNK Design Director Jennen Ngiau-Keng, founder of Taller Shoes, certainly stumbled upon a niche when he launched...
© Onya Magazine 2009 - 2021
Back to top