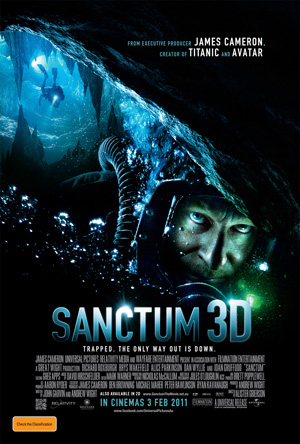 Woody Allen’s 1993 gem Bullets Over Broadway about an aging theatrical diva in prohibition-era New York City may be a strange film to think of while watching the new 3D adventure film Sanctum. And yet here I am recalling Dianne Wiest’s alcoholic star of the stage Helen Sinclair and her memorable catchphrase: “Don’t speak!”

It’s a shame Helen wasn’t on the Queensland set of Sanctum because this movie could sure use a lot less talking and more perilous action sequences. The characters in Alister Grierson’s (Kokoda) film have the distinct inability to talk like real human beings and instead only mutter clichéd one-liners, obvious local lingo and laugh out loud motivational speech. If they’d thrown a shrimp on the barbie I would have thrown my hands in the air and figured the filmmakers were taking the piss! As it stands, writers John Garvin and Andrew Wight (who’s life story Sanctum is loosely based on) haven’t given their characters any time to be established as real people. Their sole purposes appear to be a) speak exposition, and b) die once their necessity to the plot is vanquished. 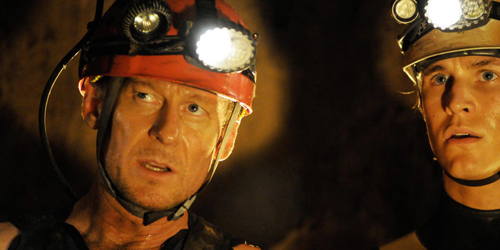 If it sounds like I am being incredibly harsh towards Sanctum then I don’t mean to be, it’s just that the dialogue these actors – credible actors, too – have to spit out at one another is ridiculous. Surely some of the worst I’ve ever heard and it’s hard for the actors to recite it without looking a bit ridiculous.

Richard Roxburgh (Moulin Rouge, Rake) more or less devours the film set with a performance that ranges from LOUD to LOUDER! Unfortunate Welsh actor Ioan Gruffudd (Fantastic Four, Horatio Hornblower) gets saddled with playing an American character with an accent so silly Meryl Streep would scoff. Rhys Wakefield (The Black Balloon) generally just has to look upset the whole time next to relative newcomer Alice Parkinson who shrieks like a banshee every few minutes. For people trapped underground in a flooding cave, they sure do look like Australian Idol contestants. As for Dan Wyllie (Love My Way), well, it’s not his fault he got all the worst dialogue, is it?

Still, if audiences are going to a movie like Sanctum for character development and thought-provoking dialogue then they were always in the wrong end of the multiplex. Where the film truly succeeds is in the creation of this immersive, 3D world. A labyrinth of cave systems and underground oceans that have their own rules that characters must adjust and adhere to. The production design of Nicholas McCallum hits all the right notes and rivals Brit-horror flick The Descent for claustrophobia-inducing sets. Jules O’Loughlin’s cinematography meanwhile does some fascinating things with reflecting lights, ominous darkness and the shimmer of water. 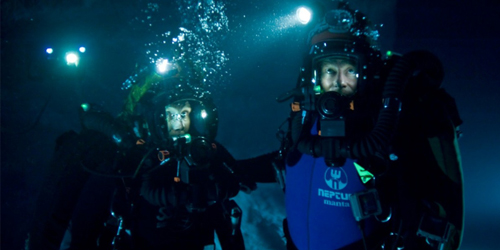 Sanctum is being sold on the name of its executive producer James Cameron and the 3D filmmaking process that he made famous with Avatar. Unlike most of the film’s shoved into cinemas that have been converted into 3D so as to earn a few bucks extra at the box office, Sanctum is filmed with the Fusion Camera System that Cameron pioneered. Subsequently the 3D work here is some of the finest on display and compared to recent titles The Green Hornet and Gulliver’s Travels it’s absolutely eye-popping. Audiences looking for some 3D thrills will probably find just enough in Sanctum. Similarly, those who want to feel the skin-crawl sensation of a movie like Arachnophobia are in good hands since several of the underwater sequences – and there are quite a lot of them – will have some audiences shrinking in their seats and maybe, just maybe, holding their breath along with the characters. Now, if only the characters had held their breath when they were meant to be talking, Sanctum would have been a much better movie that way.

Sanctum 3D is screening nationally from the 3rd of February, 2011.

When Nichola Lefroy held her second son Tommy for the first time, two things ran through her mind - one was a very powerful...
© Onya Magazine 2009 - 2020
Back to top