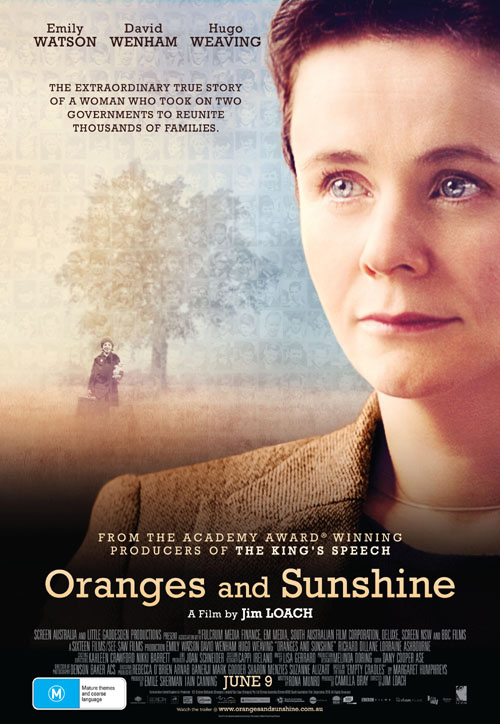 When Phillip Noyce’s Rabbit-Proof Fence – his searing portrayal of the plight of the stolen generation – was released in 2002 it had a vast and immediate impact. Thankfully, it was also a great movie made by a director at the peak of his talents and was made at a time that allowed it to have the strongest power. Now, in 2011, we get another socially conscious movie attempting to publicise a horrible injustice inflicted upon children, this time by the British government’s forced relocation of children to Australia. Oranges and Sunshine, based on the non-fiction novel Empty Cradles by British social worker Margaret Humphrys, is not the exceptional piece of filmmaking that Rabbit-Proof Fence was, but it is nevertheless a moving film about a disgraceful act that had been forgotten to the annals of history for far too long.

Beginning in the British town of Nottingham, Emily Watson’s (Breaking the Waves) polite social worker Margaret Humphrys is approached on the street by Charlotte (Federay Holmes). The woman ambushes Margaret with her claims to have been taken from an orphanage as a child and sent to Australia. Before long she discovers other adults who, as young children of mostly single mothers or so-called unfit families (basically, poor), were transported to Australia. Some of these children were put into homes as adopted children, but many others were placed into labour schools where they were forced to endure horrendous abuse at the hands of authority figures put in charge of their welfare. 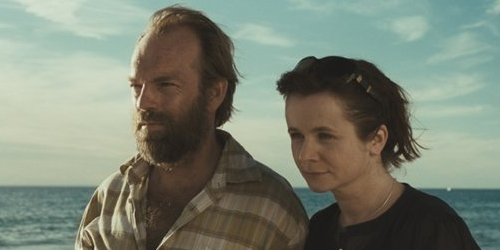 Two men that Margaret meet are former orphans Jack and Len, played by Hugo Weaving (Little Fish) and David Wenham (Gettin’ Square), who form a vital part in her efforts to track down family members of the so-called “Home Children”. As she makes Australia her second home – leaving her husband and children back home in England – Margaret must realise the harsh truth that not all of these people can be helped, but also that the help she can provide is the stuff that these people will remember for the rest of their lives.

Oranges and Sunshine takes its name from the sales pitch given by a British official to these boys and girls. A sales pitch that, it must be said, came after the cruelly abrupt, and often untruthful, claim that their parents were dead. Who wouldn’t want to live in a land where the sunshine is plentiful and you can pick the oranges off a branch for breakfast? It’s these sad promises of a better life that make their eventual existence so sad, and director Jim Loach plus screenwriter Rona Munro, do a nice, delicate job of not overly sentimentalising the proceedings anymore than necessary. Loach withholds when he could have accelerated, letting the actors and the story do the heavy lifting. It’s refreshing to see a scene where Wenham’s impetuous Len finally meets his mother play out in long shot with no teary welcomes and no heartfelt goodbyes. Audiences can already feel the power behind it without wringing tears out of them with cynical filmmaking techniques.

At the heart of Oranges and Sunshine though, and the film’s strongest asset, is the scandalous puzzle that Margaret Humphrys uncovers. Similar to films like Erin Brockovich, if not as excitingly assembled, Humphrys’ gradual realisation that she is dealing with something far bigger than she ever imagined is dramatically potent and wonderfully acted by Watson, Weaving and Wenham as well as Tara Morice (Strictly Ballroom) and Robert Dillane (The Dark Knight) in smaller roles. Cinematographer Denson Baker nicely contrasts the grey skies of Britain and sunny Australia, whilst the original score by Lisa Gerrard is restrained and repetitive, yet appropriately stirring.

In November 2009, Australian Prime Minister Kevin Rudd formally apologised for Australia’s part in the actions; in Februrary 2010 the British Prime Minister Gordon Brown did the same. The fact that it happened at all is a travesty, but it did, and it’s an important part of history that viewers should be aware of. Jim Loach has broached this topic with respect, but never demeans it by plucking the audience’s heartstrings with obvious histrionics and grandstanding. Oranges and Sunshine is a powerful exploration and its subjects should be proud.

Oranges and Sunshine is playing in selected cinemas nationally.