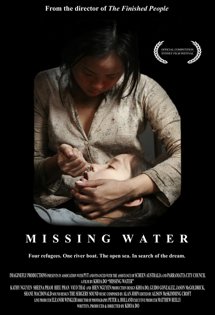 There have been so many fascinating films made about the Vietnam War that it can be classified as its own subgenre. The horror and futility of the conflict have been examined in some groundbreaking films. These films however have been largely focused on the American experience, with a failure to explore the consequences for the local population. It is this omission that Missing Water’s director Khoa Do is trying to correct, “So many stories- one war. But there have been no stories about what happened to the Vietnamese people. Afterwards. The refugees.”

The beauty of Missing Water is the simplicity of the film. The audience isn’t overcrowded with characters, locations, complicated back stories. Khoa Do hasn’t filled the script with complex political issues of North and South. We have four players: sisters, Kim and Hanh; a young man, Chau and an older member, Uncle. They all have a common goal, a better life in America. They start their treacherous journey from Vietnam in a small fishing boat and end up in Australia. Missing Water presents the brutal realities of this journey; starvation, pirates and the aggressive policies of the Thai and Malay governments, who towed many boats back out to sea. Khoa Do has taken inspiration from actual accounts of boat people. Approximately 1.5 million people are estimated to have fled Vietnam in the late 70s and 80, a number that includes Khoa Do and his family.

Perhaps the cleverest aspect of the film is the staging. Khoa Do and his team have accepted a lack of money and have turned a weakness into strength. The story plays out in a clothes factory, the sewing machines and clothes racks taking on the shape of the boat, forcing both the actors and the audience to use their imagination to embrace this convention. It is daring to expect an audience to follow something so different from the standard Hollywood film experience. Though at first it is not an all-together easy transformation, the power of the story compels the audience to accept this change.

Like the setting, it takes a while to warm to the cast. Thankfully their performances grow as the film progresses and they are able to do justice to the weighty subject matter. The storyline for the sisters is the most successful and it wouldn’t be unfair to question if Chau (Vico Thai) and Uncle (Hieu Phan) were underdeveloped in terms of character and story arc, especially given Hieu Phan deeper connection to the story. Hieu Phan left Vietnam with his family, in similar circumstances to his character, in 1979. 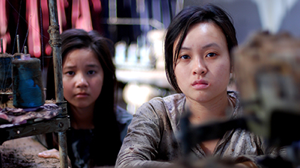 Sheena Pham as Hanh and Kathy Nguyen as Kim

The cinema experience was heightened by being able to watch the film at the Sydney Film Festival for its world premiere. The audience was filled with so many people invested in the story, not only the cast and crew, but also people who helped fund the film and members of the Australian-Vietnamese community. Missing Water helps demystify the plight of asylum seekers by showing the beginning of the story to an audience all too familiar with how it ends. Let’s hope Khoa Do continues to make films that fill this gap of representation, which is long-overdue not only for Vietnamese boat people, but for asylum seekers whose plights are so often distorted in the Australian media.

Missing Water won the 2009 CRC Award sponsored by the Community Relations Commission for a Multicultural NSW, at the Sydney Film Festival.

To find out more about the film you can visit its official website www.missingwater.com

Australia, We Have A Problem

Australia, We Have A Problem