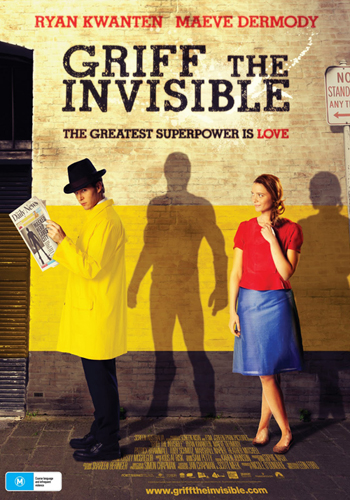 It’s inevitable that Griff the Invisible will get compared to Matthew Vaughan’s Kick-Ass and other films of that kind. Doing so commits a great disservice to Griff, as it actually appears to align itself more with Jean-Pierre Jeunet’s bouncy soufflé Amelie. Griff the Invisible is about two socially awkward and self-isolating people whose burgeoning relationship becomes a tale of whimsy and magical fantasy, yet one that never forgets the harsh reality of the cruel world around them. It’s a film that asks potent questions about important topics, but will first and foremost charm viewers with its oddball humour and romanticism. Griff the Invisible is a treat.

Set in the inner suburbs of Sydney, we meet the lonely Griff, played by Ryan Kwanten (Red Hill, True Blood), a bullied office worker by day, but by night he runs the streets and kicks the collective arse of evil muggers and thugs. His only company is his brother (Patrick Brommell, Hawke) and the kind bargain store assistant that unknowingly helps him with his superhero supplies (Marshall Napier, City Homicide). Griff’s life involves being laughed at by colleagues, eating Chinese alone and hiding his secret identity with curtains and blankets whenever his brother visits. It’s upon one of these visits where Griff is introduced to Melody (Maeve Dermody, Black Water) and sparks fly, setting them on a course that will strike fear in the villains of modern day Sydney and set their own hearts towards their destinies. 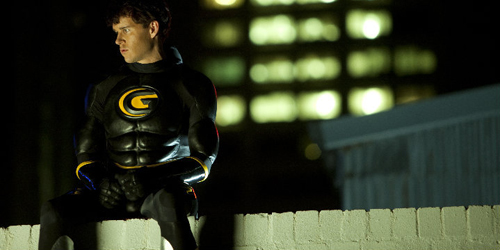 There’s a lot to like about Leon Ford’s debut feature film as writer and director. There is such a delicate sweetness to the relationship between Griff and Melody, yet Ford never loses the necessary undercurrent of are-they-or-aren’t-they-mentally-ill that lends the final scenes a weighty, but beautiful sharpness. Never venturing into Midday Movie styled over-the-top histrionics, Griff the Invisible instead uses the central relationship as a way to suggest that even those on the fringes of society deserve happiness.

Don’t be confused, however, into thinking Ford’s movie isn’t first and foremost an adventurous and cheeky experience at the cinema. There are plenty of tricks up Griff’s sleeve that should lure in punters. I particularly enjoyed the brittle comedy that is dotted with dry line-readings from the cast that also includes Heather Mitchell (Spellbinder) and Toby Schmitz (Three Blind Mice). Also fascinating is the wonderfully retro look that inspires memory of other “quirky” inner-suburban dramadies of the late 1980s to early ‘90s like Proof, Malcolm and Death in Brunswick. In fact, for a film supposedly set in the current day, Griff the Invisible looks remarkably not of this time, helped by Simon Chapman’s film noir-inspired cinematography that films skyscrapers with just as much mystery as the garbage-lined back alleys of a Chinese restaurant. 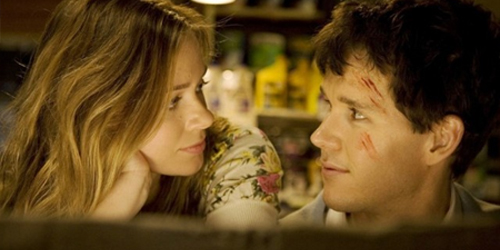 As Griff and Melody, it is up to Kwanten and Dermody to sell the material more than anyone else. Whether it’s the act of creating an invisibility suit out of lemon juice and bicarb soda, tricking metaphysics by falling through walls or simply making us believe that these two odd souls could somehow turn their reality into ours. Ford’s striking compositions – the opening title shot is one of the ages – help get our attention, but it’s these two fine young actors that make it. And if Ford’s screenplay doesn’t give them a whole variety of notes to play, they still manage to play some exquisite tunes together.

Griff the Invisible is the first great Australian film of 2011 and does so with its delightful Aussie vernacular of words and phrases as well as a distinctly local perspective. Superheroes sometimes feel like they’re taking over the multiplex, what with Hollywood’s sick obsession with building identical franchises to milk money out of punters who’ll see anything with an explosion and a pretty lead actor, but Griff the Invisible is a delicious antidote. There are explosions and pretty actors, but behind the costume and the pyrotechnics is a character study worth watching and a love story that deals with richer territory than most.

Ten Days on the Island