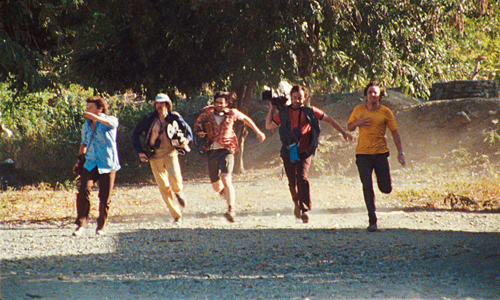 The words “Balibo Five” tend to elicit a lot of emotion in Australians. The tale of five young Aussie blokes in East Timor on the brink of war has been one that continues to evolve as new evidence comes to light. The latest step is this film by Robert Connolly (The Bank) simply entitled Balibo. It is emotionally charged, stunningly realised, powerfully made and is a film that, whilst I’m hesitant to say it, every Australian should see.

Set in 1975 after East Timor sought independence from Portugal, and in the wake of encroaching Indonesian armies, Balibo tells the story of five Australian newsmen – two from Channel Nine and three from Channel Seven. In this day and age of modern news technology, it’s shocking to note that they were the only international press inside this small nation, and were the only connection viewers had to the story unfolding before them.

When the five men go missing, presumed caught in crossfire – still the official statement of the Indonesian government – nobody knew about it, nor did anybody seem to care. Now-President and then freedom fighter José Ramos-Horta enlists Roger East, an Australian journalist, to tell his country’s story. What he discovers is something that should speak to the heart of every patriotic Australian.

Connolly has structured the film using Roger East’s (Anthony LaPaglia) trek through the Timorese countryside to run parallel to the story of the five men. LaPaglia is in fine form as East, and little-known but very talented actor Oscar Isaac is wonderful as Ramos-Horta. However, it is the performances of the actors portraying the five doomed journalists that really shine. Damon Gameau was my favourite, but the likes of Gyton Grantley, Thomas Wright and Nathan Phillips also put in incredible work.

Technically the film soars, with gorgeous but gritty cinematography by Tristan Milani, startling sound design by Sam Petty and Emma Bortignon, and editing by Nick Meyers that creates urgency and tension in the midst of shifting timelines. Academy Award-nominee Lisa Gerrard provides a haunting score, which doesn’t overdo the sentimentality, but certainly helps tug at the heartstrings.

Balibo is adapted from the book ‘Cover Up’ by Jill Jolliffe, a journalist from the 1970s who has followed the Balibo story since its beginnings. It is, at least partly, because of ‘Cover Up’ that the film is filled with such a keen sense of authenticity. No matter how much or how little you know about this story, you should definitely seek out the film. It’s a rare moment where an Australian film actually addresses an important part of our history. That the end product is so good is simply wonderful and it is a great testament to the story of the Balibo five.

The Australian release date for Balibo is August 13. It will also screen as a part of the Melbourne International Film Festival (24 July – 9 August).

Rhys Ripper from Academy for Men

Balibo is getting a new life. Can’t wait to see the movie. Thanks

I saw Balibo last night and it was incredibly moving. While I generally knew the story, the way it has been told is absolutely brilliant. The parallel story of East and the Balibo 5 kept the pace up, while the performances from Anthony LaPaglia and particularly Damon Gameau were absolutely rivetting. I agree with the reviewer – everyone should see it. I think its been a long time since we’ve seen a movie like this one come out of Australia.

Finally got around to seeing Balibo last night. It was extremely confronting in some parts but is such an incredibly important piece of film making. I really liked the way that the two stories of the Balibo Five and then Roger East were told side by side and East trekked through the same areas the Five had in the weeks/months before. I was surprised that the boot wasn’t sunk into the Australian Government more at the end. The Australian Government, over the 35 years since this horrendous event, have remained largely silent on the Balibo Five and refused to push Indonesia for a full investigation. If people would like to support the memory of the Balibo Five, they should visit http://www.balibohouse.com to make a donation to the local community centre which is housed in the so-called ‘Australian Embassy’ that the Five sheltered in their final night.

By Jonathan Howcroft After my name I am entitled to add the letters BA and MA. I only narrowly avoided committing to the minimum...
© Onya Magazine 2009 - 2020
Back to top