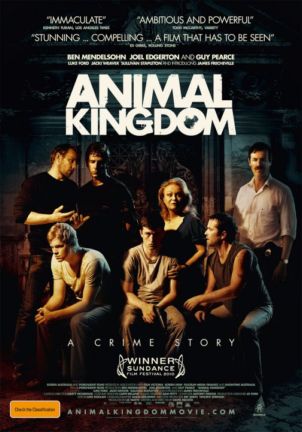 When Australians do film well, we do it bloody well. The humour is dark and unforgiving in its familiarity. The lack of sentimentality is more emotionally controlling than any contrived Hollywood epic could ever hope for. We have a way of telling our stories – in literature as well as film – that, when done well, resonates uncomfortably deeply. Animal Kingdom – from its opening scene which makes an afternoon viewing of Deal or No Deal unbearably sad – to its inevitably tragic final moment, is one of these stories.

When seventeen year old Josh Cody’s (Frecheville) mother dies, he calls the only family member he knows he still has – his estranged Grandma. In doing so, he is ushered back into the fold of a family long-entangled with crime, living under the scrutiny of a police squad determined to sort things out on their own terms. One senseless killing is paid back with another and Josh becomes embroiled in a terrifying mess that seems to have just one destructive conclusion.

This is writer/director David Michod’s debut feature film and he is rewarded richly by his exceptional cast. As the shy, borderline socially inept Josh, newcomer James Frecheville does extraordinarily well; in fact, the second scene of the film is one of the most effective I have seen in a long time. Jacki Weaver imbues her family matriarch with an underlying sense of deep psychosis – unwavering blue eyes, a perpetually chipper voice and an insistence on giving her sons a lingering kiss on the lips – all contribute to an unsettling, amoral woman who will do anything for her sons. Guy Pearce and Joel Edgerton are dependably good (better than good) as Detective Leckie and Barry Brown, and Sullivan Stapleton and Luke Ford do excellent jobs of eking empathy out of viewers for questionably motivated characters.

Ben Mendelsohn deserves a special paragraph because he is, quite simply, mind-blowing.  A quiet tour de force, he spreads tentacles of malevolence throughout the film so stealthily, in such an underplayed manner, that exactly how terrified you are of his flat-eyed Andrew ‘Pope’ Cody, and how terrified you are of what he’ll do, sneaks up on you and grabs you by the throat.

Tension is maintained by never really leaving the main characters – by not getting caught up in the drama of the genre’s usual trappings. The crimes are shocking enough. The retribution isn’t formalised, it is dealt out by the key players according to their own twisted ways of believing it all works. Slow motion and tight, lingering shots on the actors’ faces are routinely used, heightening the sense of constant dread that bubbles beneath the surface of the film from beginning to end.

When I walk out of Australian films like this, it makes me feel proud of what we can produce – and relieved that in amongst the mediocre, we are still creating such excellent films. Animal Kingdom is incredibly good. Incredibly. See it.

As part of their Chancellor’s Lecture series, Swinburne University hosted a seminar on journalism last week. The discussion...
© Onya Magazine 2009 - 2021
Back to top