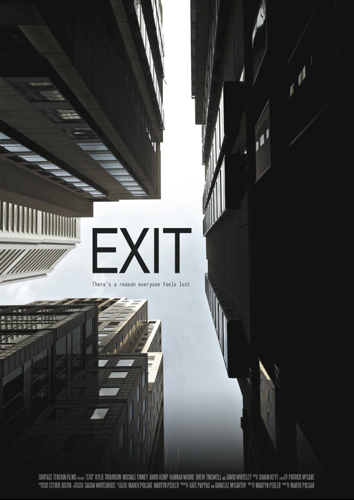 A subculture has emerged within the maze of a modern metropolis in Exit. A city – one that certainly looks like Melbourne (it was shot there), but is perhaps deliberately never named – that is comprised of angular architecture, walls of concrete and glass, and somewhat zombie-like office workers that drift about as if in a fog. This subculture of people live off the grid, squatting in abandoned buildings as they seek out the “exit”, a mythical doorway that will lead whichever lucky soul who discovers it away to (so they suspect) a better life away from all of their worldly troubles. Having dropped out of society, deserted their jobs, families, and friends along the way, they attempt to navigate the so-called maze, trying not to get lost with one mere wrong turn. Oh sure, their bodies exist within the world, but they go by more or less unnoticed as they slink down graffiti-sprayed alleyways, through vacant office skyscrapers, and even through busy streets as they attempt to solve the vague clues (clues that may have conjured up out of thin air) without going the wrong way. 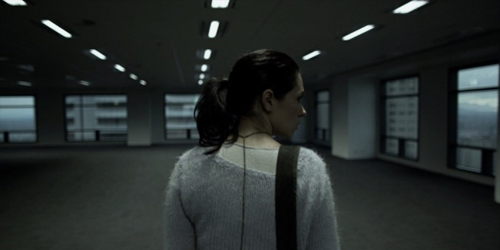 Exit is the first feature production of director Marek Polgar and screenwriter Martyn Pedler. It is a thematically ambitious story that manages to create its own mysterious style in spite of what one can only assume was a very minimal budget. This is a truly independent venture and if its somewhat jagged, unpolished edges sometimes distract, Exit thankfully never loses sight of its cerebral tone and never compromises its potentially bleak vision of a world gone morose.

The characters in Polgar’s film are all lost and dissatisfied with the world. The yearning for escape is a theme that permeates throughout the entire film and I particularly admired the way it toyed with the idea of people who have reached such a point of no return that they turn to a metaphorical way out. If anything, these people are just as same as that middle-aged man who buys a brand new sports car to avoid his pain, and the film allows these characters to engage with the idea that this world is perhaps just not a very nice place. We’ve surely all thought of it at one time or another, these people just decided to go down a different path to deal with it.

Steeped in ambiguous mind games, Exit plays like a combination of science fiction, thriller, and film-noir, without ever dovetailing its unique style. I noticed a particular inspiration in the form of Alex Proyas’ Dark City, which also followed a man who stumbles across the reality of the inescapable world he lives in and goes about finding a way out. That is at times also plays like a sombre version of a Charlie Kaufman (Eternal Sunshine of the Spotless Mind) and Richard Kelly (Donnie Darko) collaboration only adds to its mystique. 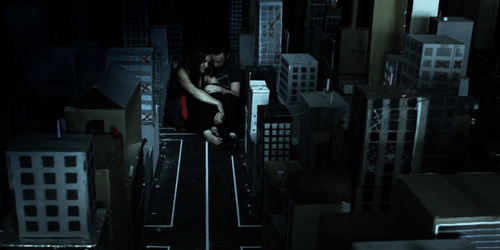 Aided by some inventive production design by Esther Justin – I especially adored the paper city that one maze hunter constructs in their makeshift headquarters – and truly special cinematography by Sasha Whitehouse, Exit is nothing if not visually appearing. The work of Whitehouse is in fact the film’s greatest asset, as he finds constantly stunning ways to frame the city of Melbourne and its frequently juxtaposed mix of classic, rundown, and modern imagery. Far, far away from the tourism-esque Melbourne lensing in the big budget Any Questions for Ben?, Exit instead finds a way to make the city’s famous, striking locations appear natural, and in some cases mysterious and ominous. Saturated in rich, deep hues, smudged neon against night skies, and overcast, steely daylight tones, it’s quite a feat of the camera and Whitehouse will certainly be a name to keep an eye on (literally, as the case may be) in the future.

As far as Australian films go, Exit is certainly different in many ways. Released digitally across the globe on platforms such as Hulu, Amazon, and now iTunes, home viewing is perhaps the best way to view the film and avoid all the silly comparisons to films with far bigger resources at their disposal. Australian cinema rarely tends to go in this direction and that’s probably because there’s little audience for a solemn examination of unhappy souls that isn’t masked by humour or hysterical theatrics. That’s a shame, but Exit certainly fills the spot nicely. And it’s a must see for lovers of Melbourne, too, as it paints the city in a beguiling, mysterious fashion. Melbourne is more or less the star of the show, although maybe you’ll be left wondering why anybody would want to exit such a gorgeous city in the first place.

Exit is available to rent or buy on iTunes now.

Calling Australian Innovators - Are You Ready To Make A Global Impact?

Calling Australian Innovators - Are You Ready To Make A Global Impact?

Australia’s brightest minds are being offered the opportunity of a lifetime to study at Silicon Valley’s famed Singularity...
© Onya Magazine 2009 - 2021
Back to top