“We’re going to get an adult rating!”

For a film built upon such shifting sands of identity and morality, it’s good to know that at least its much-deserved adult rating is a certainty.

If one of cinemas greatest gifts is to confront taboos head on and make audiences contemplate different points of view of something they otherwise might never have considered, then the debut feature of acclaimed local film producer John Winter (Rabbit-Proof Fence, Doing Time for Patsy Cline) will be like Christmas for audiences brave enough to take a chance on Black & White & Sex. A pseudo-experimental feature that Winter also wrote, this film will be a hard ask for many who will balk at the idea of seeing a micro-budget independent feature that raises questions about the sex industry, its workers, and sexuality in general. “It’s a bit of an experiment,” says one of the characters as if pre-empting the negative “WHO WANTS TO SEE THIS?!?” feedback that so frequently greets local films that aren’t aimed squarely at the multiplex. Still, filmed in striking black and white and structured so as to keep the film and its audience constantly on their toes, Black & White & Sex is an adventurous, if occasionally too knowing, look at a world so rarely explored.

Set on a single unadorned stage, Winter’s film sees eight actresses portray a lone prostitute named Angie. Echoing the booming omnipotent off-stage presence of A Chorus Line is a film director (Matthew Holmes, Blue Heelers) whose face is never seen – his naked rear end, on the other hand, is – but whose voice commands his willing subject to answer probing questions as a way of uncovering the inner-psyche of a modern day working girl. What starts as a rather simple exercise for both director and subject – she’s only there because she’s getting paid – begins to unravel as lines between dominant and submissive are blurred and the tables are turned.

Over 90 minutes Angie shifts from one actor to another, and with each new actor brings a new dynamic to the character: she is young, old, blonde, brunette, aggressive, rich, poor, black, white, and everything else you could possible say to describe any number of women seen walking down the street on any given day. It’s perhaps a tad too obvious as to what John Winter is trying to achieve by showing his audience that, especially in this day and age, anybody could be doing what Angie does for a living and you wouldn’t necessarily know just by looking at them. Where the film succeeds, and where the gamble of eight separate actors pays off, is in the way it uncovers previously unseen depths to the persona of a person like Angie.

When first seen Angie is portrayed by Katherine Hicks (Rescue Special Ops) as a brash and loudmouthed woman who has seemingly gotten by in life by giving men what she thinks they want. A flash of her chest and a seductive purr to her voice is the least of the director’s desire, something that sees tensions rise in between conversations ranging from the delicate issue of morality and dignity to the sordid sexual details of her clientele. She thinks he’s a prude, he thinks she’s, well, a bit of a whore; he even laughs when she says she has a degree in science. “You see me as a whore before anything else,” is the sort of abrupt dialogue here that can sound both on the nose and terrifically on point. As the balance of power begins to shift between the man and his documentary muse more and more is revealed on both sides of the camera and what develops is an increasingly fascinating tug-of-war that while rarely as audacious as, say, Julia Leigh’s Sleeping Beauty, still has its own magnetic quality about it.

Whether Black & White & Sex’s observations about modern life are correct or not – “business is booming, families aren’t”, cracks one of the eight Angies – doesn’t stop the fact that it explores an aspect of the world that so few films ever do, and especially not in a manner such as this. Saskia Burmeister, looking and acting like a lost Deschanel sister, explored somewhat similar territory in The Jammed where she played an illegal refugee entered into sex slavery. This time she plays a willing proponent of the industry and provides a startling mirror to her award-worthy work in Dee McLachlan’s thriller from 2007. Alongside actors like Maia Thomas (Noise), Roxane Wilson (The Alice) and a spectacularly icy Valerie Bader (Wish You Were Here) as an aging mutton-dressed-as-lamb variation of the character, Angie is keenly revealed as somebody who saw the sex industry as something completely separate from the cinematic version so commonly seen. Angie doesn’t die in the end, but she does show up Meg Ryan’s famous “I’ll have what she’s having” moment from When Harry Met Sally.

With its hopscotch structure and cracker performances, Black & White & Sex eventually succeeds at turning its rather circumspect beginnings into a fascinating whole. While it may have worked, perhaps, even better as a stage play with a very direct line-of-sight to the audience – Angie routinely calls out to “Mr Raincoat”, a nickname for daytime cinemagoers after little more than a titillating thrill – it eventually overcomes its staginess and makes for captivating viewing. If it’s not quite the exciting night at the movies that you’re used to then it is at least certainly a probing one.

Black & White & Sex is out now in limited release through Titan View.

This movie was fascinating, and created many conversation tangents after viewing. All actresses made Angie their own. Loved it. 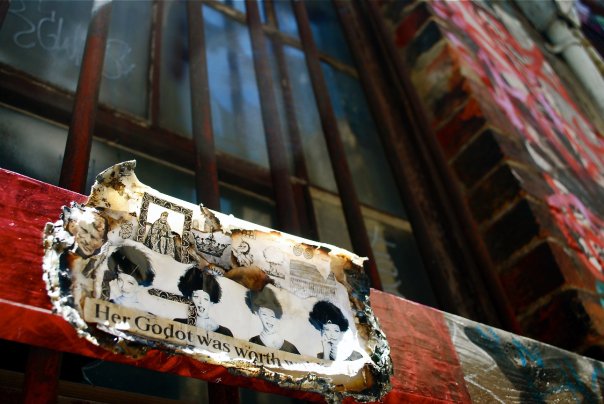