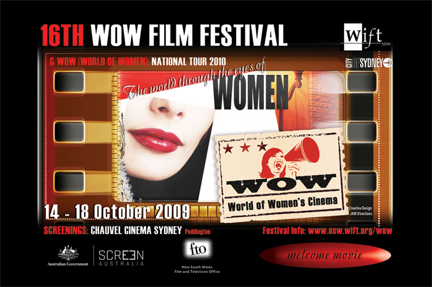 If you like women and/or short films this is the festival for you. Running in Sydney between the 14-18th October the festival will be screened at the Chauvel Cinema in Paddington, with forums being held at Metro Screen in Paddington and the Australian Film Television & Radio School (AFTRS) at Moore Park. The festival is not reserved for Sydneysiders alone and will be touring Australia with 18 destinations in 2010; specific dates and locations to be announced.

WOW’s tagline ‘seeing the world through the eyes of women’, highlights their commitment to encouraging and promoting female directors, producers, writers, editors and cinematographers in both the Australian and the International film industry.

The 5 day program showcases some of the best contemporary Australian and International short films. The festival will also debut two Australian feature films, with the world premiere of I wish I were Stephanie V and the Sydney premiere of Four of a Kind. The festival also includes Q&A sessions and filmmaker forums.

For a detailed festival program and ticket prices go to the website http://www.wift.org/wow/index.htm. Here you can also find out more information about WOW and the work of WIFT-Women in Film and Television, plus checkout the online film competition.

That’s Me To A Tea

That’s Me To A Tea

By Sarah Willcocks Tea can be a daily ritual; my everyday poison of choice is peppermint, but ‘taking tea’ can also...
© Onya Magazine 2009 - 2021
Back to top