Participant Observation: Dispatches from the SFF

Like all well trained anthropologists, I believe in participant observation, so I have joined the inner-workings of the Sydney Film Festival. Thankfully as a lay anthropologist I am currently channelling more Margaret Pomeranz than Mead, so I can stick to the films not the complex cultural and social workings of the festival. Early mornings and late nights have been rewarded with some cinematic gems. 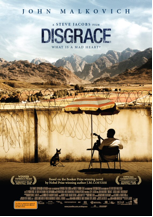 Questioning intellectual theories and realities of guilt, shame, violence, punishment and compromise; this film is successful because it explores the moral complexities that these themes bring without spoon-feeding the audience right and wrong judgements. Tackling the hard issues, the film examines the politics not only of race, but also gender.

The performances of Malkovich and Ebouaney are good; they don’t overact their roles, choosing the story over soliciting audience sympathy. In recent years  Malkovich’s own persona has become increasingly hard to look beyond when he is on screen; thankfully he tones down the Malkovich enough that he becomes David Lurie, the ostracised English Professor. The real stand out performance is Jessica Haines, who is fantastic as Lurie’s independent daughter, Lucy.  In her first major role Haines competes well with her major league co-star.

Lurie’s reliance on intellectual superiority and refusal to accept the true consequences of his behaviour sees him taking a journey of both physical and emotional degradation. He must cope with the realities of contemporary South Africa and his own marginalised role in it, where his knowledge of romantic poets and high-moralising orations are redundant. His daughter, Lucy is much more aware of the spaces between the two cultures that are meant to make-up one nation. Instead of fighting her change in fortune she chooses to work within the new parameters. Petrus, the upwardly mobile farm worker, is perhaps the most complex character. Living in a world with new freedoms but old prejudices, the audience must question if his ambition has warped his ideas of right and wrong. Is he implicit in the violence that disrupts David and Lucy’s lives as David believes, or like Lucy is he simply trying to navigate a new system of living?

It is probably prudent to warn animal lovers that dogs and death are a reoccurring motif for the film, though it is always strange that the death of an animal on screen always receives a bigger audience reaction than a human death. 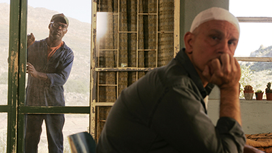 Eriq Ebouaney as Petrus and John Malkovich as David Lurie

Filmed largely in Cedarburg, Western Cape, South Africa, with the house purpose built, the surrounding landscape is spectacular giving no hints to the violent undercurrent coursing through this country as it tries to recover from years of state led oppression. 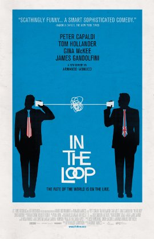 If you are offended easily steer clear of In the Loop. Based on the brilliant British TV series, Thick Of It, this political satire reveals the cut-throat nature of politics. Not light on swearing, the scriptwriters use incredibly inventive and rude insults that are comedy perfection. This dialogue driven film revolves around verbal humour above sight gags.

In the lead up to the invasion of Iraq, the British and American government are both being coy about their public positions on war. An inappropriate vox pop, ‘To walk the road of peace, sometimes we need to be ready to climb the mountain of conflict’ by the new Minister for International Affairs, played by Tom Hollander, sees him being headhunted by both sides of the debate across the Atlantic.

Utilising the TV series’ brilliant cast and bringing in some heavy-hitters from the States, like James Gandolfini, the sublime dialogue is equally shared out between the Yanks and the Brits. All the actors are great, making the film a real ensemble piece. The writers, Armando Iannucci, Jesse Armstrong, and Simon Blackwell, include a subplot involving comic Steve Coogan (who always does his best work in British films) which brilliantly illustrates the differences between British and American politics and the role of the politician. 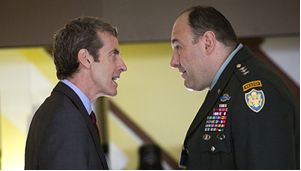 It is probably best not to think about how close to reality the storyline is, with the doctoring of reports on logistics of an invasion of Iraq and the manipulation of the media by spin doctors, because your head might explode with impotent rage.

In the Loop is screening again at the Sydney Film Festival with comedian Angus Sampson’s short film The Last Supper at the Dendy Opera Quays.

Really nice reviews Beth! I especially like the line “Living in a world with new freedoms but old prejudices” – you capture the idea of post-Apartheid South Africa perfectly.
I found the acceptance displayed in the film to be absolutely mind boggling. Petrus repeats, “It is finished now” and I found myself getting really frustrated and angry at he, Lucy and her friends for just continuing on like nothing had happened (almost). But then that’s the great thing about the film, that as you say it doesn’t spoon feed you moral judgments – you really have to confront the issues on a personal level.

As for In The Loop, gutted I missed the screenings, but I’m holding out that the film will get a theatrical release. Also very pleased to see Coogan back in the motherland after his appalling turn in Hamlet 2. You’re right, he really should stick to British comedy.

By Alice Tynan It’s that time of year again. Winter is upon us and with that the Sydney Film Festival will be rolling...
© Onya Magazine 2009 - 2021
Back to top