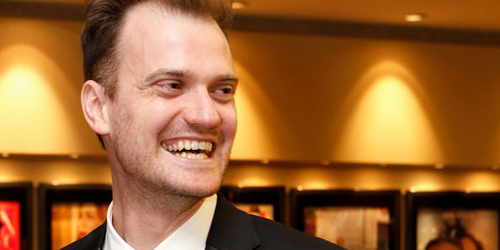 Western Australian filmmaker Ben C. Lucas is making waves with his debut movie, Wasted on the Young. Originally conceived as a horror movie throwback, it morphed into morally conscious thriller set in a prestigious high school. Starring Alex Russell and Oliver Ackland as stepbrothers on opposite ends of the social spectrum, and Adelaide Clemens as the girl that comes between them. Wasted on the Young made its debut at last year’s Sydney Film Festival, where Lucas’ edgy filmmaking and its controversial subject matter caused a stir followed by stints at the Toronto and Korean film festivals.

Matthew Pejkovic was fortunate enough to sit down with Lucas, who talked about the making of the film and its themes.

The film has provoked a lot of conversation. Was that the main goal?

Yeah, it’s been really cool, actually. I’m glad it’s provoking a reaction, one way or another.

So it has been since June when the film premiered at the Sydney Film Festival, it’s a long time since then. How have you find the time has passed?

Great. Really good. It kind of comes and goes in waves. I feel like I’ve washed my hands of the film, like three or four times already. Then you keep on getting dragged back to it, which is great because it means people love it. But I’ve been so focused on moving forward in other directions, and working on other projects. I want to do another film this year, so I kind of always focus forward (laughs). Thankfully the film has had such a response that there is now a machine behind it, like Paramount.

Way back in the beginning when we all had an idea, it’s all about – on an indie level – the filmmakers pushing it uphill (laughs).

Speaking about that idea, the original concept was a slasher film. How did that change to Wasted on the Young?

I’ve got to be careful on the way I word this, because I was misunderstood recently in an article in Western Australia, where they kind of said I had an idea and ended up making something different, which sounds really imprecise, haphazard, and random.

What happened is I was already friends with Aidan O’Bryan the producer, and he had an idea that he wanted written, which was for him a small budget, DVD release, slasher flick – straight up, easy for him to market, release and get his money back.

That was his idea, an ‘80s throwback, sort of Carrie, about a kid who gets revenge against all of the mean people at his school. I like to work, so I said yes. I liked even more the idea, since I never written something based on someone else’s concept before. It has always been based on my own material. It wasn’t the sort of thing I was into, so it was part of the challenge writing something that wasn’t from me, so that was great.

I wrote it, got it out of the way, and moved on. Then Aiden got the money together for it and asked if I wanted to direct it. I was in a really ungrateful position, so I said “No, I don’t. But I really need, or want the opportunity, so do you mind if I re-write it and change it into something different?”

We were actually casting at that point for the original idea, but thankfully the production team and financers were behind the filmmakers, so they were willing to let it go that way, which was really rare. So it was a big re-write at the last minute, for something which I really wanted to do, and I thought was a bit of a career builder.

This was your first feature film. What preparation did you do beforehand?

Film gets progressively more expensive as time goes by. Pre-production is expensive, production is really expensive, post-production is astronomically expensive. It gets worse and worse, so you don’t want to be learning your lessons and planning your execution in the fat end, where it’s costing thousands of dollars an hour. You want to have all of that done when it is cheap or free.

It all comes down to preparation. That’s casting, rehearsal, storyboards, location scouting…just conversation. Sitting down with the production designer or the DP (Director of Photography), watching movies, talking about the certain things we want to do. How are we going to cut? How is it going to feel? What will the colour palate be? That is a pretty standard thing you would hope everyone would do, but we took that to a much higher degree.

In addition, we were just really surgical about how we scheduled what sort of value we were putting on screen, in terms of the scouting the locations, what types of lenses we would use, and how we were going to capture this thing.

We had some very precise rules about all of that stuff. We didn’t shoot coverage, meaning we didn’t throw two cameras at something, so we could throw it together like we shot exactly what we needed, which presented its own challenges in post, but that’s just the way we had to do it. That’s how we could afford the time, basically.

In a day if you want to get 30 shots instead of 20, you want to know what each of those shots are gonna be. So it’s kind of our approach.

You have talked about certain rules in making the movie, but there were also rules in place on the screen, one of which was that no adults were to be featured in the film. What did you want to achieve with their absence?

By omitting them, you make a really strong point of how they are ignored anyway. In the script level there were adults, but it didn’t take long to realise in the scenes what would happen is the adult would say, “Tsk, tsk, you’ve shouldn’t have done that, and don’t do it again”, and the kids would ignore them and do it anyway.

So I thought it would be more interesting to get rid of them all together (laughs).

But there were times when I felt the presence of an adult was needed. That perhaps an adult figure could provide a positive influence.

Yeah, but again the story is tightly bound in that world, and that’s a world those kids have created, those characters have created, and there isn’t room in that for any authority figures at all. In fact, it relies on there being none.

So I think the parties, and the schoolyard politics…that stuff happens under the radar where kids go through a lot of effort to make sure parents and teachers don’t find out about it. In a way it feels like a parallel universe, this pocket dimension where all of this shit happens out of sight of the authoritative adult world.

So yes, if they were discovered someone would step in and try and stop them maybe, but their not discovered so, good point (laughs).

Is it the kids that have gotten worse, or has the development of wireless technology given us an insight we haven’t seen before?

It’s a really interesting discussion, and I’m sure there are social analysts who are much more insightful on this than I will ever be. But I’m pretty convinced that nothing’s really changing. I don’t think kids are getting worse, I think the tools are changing. I think the structure of it changes.

I don’t know if kids are any crueller than what they used to be. If you go back 300, or 400 years, would you say that a 15 year old was more polite and less abusive then they are now? I find that sort of hard to believe.

It’s probably getting a bit more exposure, because there are so many cameras around, so maybe that’s a part of it. I think another influence is the fact that you are able to be cruel impersonally. You can post on a forum something really racist, or derogatory, or cutting, or hurtful, and you don’t have to face up to it. They literally don’t own that statement. So I think that impersonal nature is really cruel, but the people aren’t any meaner.

Wasted on the Young is screening nationally from the 3rd of March. Read Glenn Dunks’ review here.

You can't say that we don't look after you here at Onya. Especially when our friends at Echolife are offering a reusable...
© Onya Magazine 2009 - 2021
Back to top