“Sometimes I believe in as many as six impossible things before breakfast.”

It began, as many great adventures do, with a “what if”—what if, screenwriter Linda Woolverton mused, Alice grew up and returned to Wonderland?

From that spark a cinematic phenomenon caught fire.  Woolverton’s re-envisioning of the classic tale is now Disney’s latest big-screen triumph, directed by Tim Burton, and Lewis Carroll’s iconic words about believing in the impossible have been transformed into an exuberant battle cry for anyone staring down a Jabberwocky. 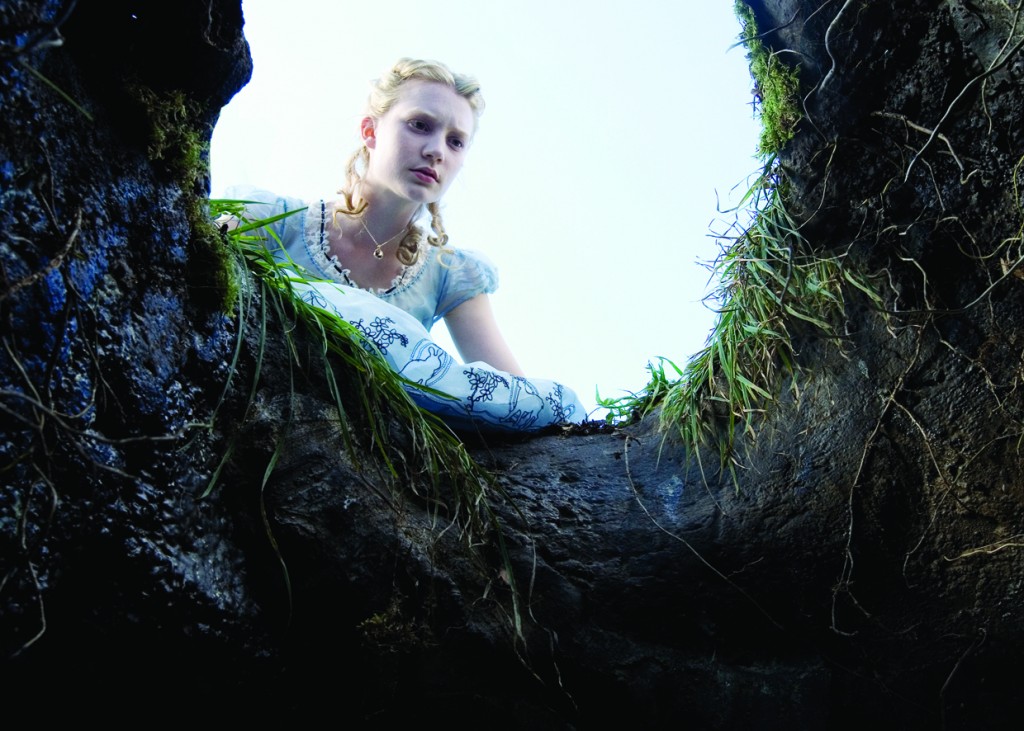 19-year-old Alice Kingsleigh, played by Mia Wasikowska, chafes under the conventions and expectations imposed by Victorian society; she daydreams about men wearing dresses and women wearing trousers, and wonders what it would be like to fly.

“I did a lot of research on the ethics and mores of how young women were expected to behave, and had Alice behave not that way,” Woolverton explains.  “She doesn’t wear stockings.  She doesn’t like them.  I don’t like them either.  The Victorian era was perfect because it was easy to shock.”

But Alice is stopped.  “She doesn’t know who she is.  Other people have determined her path, and presented her with some options.  She looks at the options, and she hesitates.”

“At a certain age, girls in society are pressured to be a certain way,” Woolverton continues.  “They step back from being the smartest one in the class; they start wanting to be attractive to boys.  I always wanted to address this issue in my work.”

“You’re not the same as you were before….you’ve lost your muchness,” the Mad Hatter, played by Johnny Depp, tells Alice.

“Having lost her muchness is having lost knowing who she is,” Woolverton says.  “If you look at the Alice in the books, she’s intrepid, she’s not afraid, not daunted; she’s very different from the Alice we meet at the beginning of the movie. 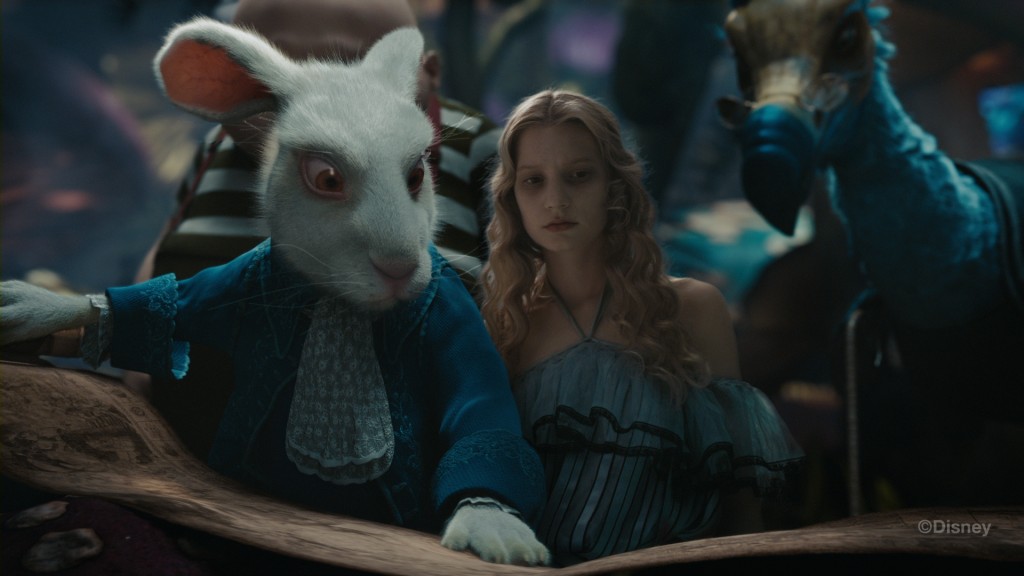 Woolverton drew on Carroll’s famous poem “Jabberwocky” for inspiration, making it about Alice and deftly causing the poem’s “he” to refer to “she.”  In the film’s climatic scene, as Alice advances on the Jabberwocky, she counts off six impossible things to herself:  “There’s a potion that can make you shrink; a cake that can make you grow; animals can talk; cats can disappear; there’s a place called Wonderland; and I can slay the Jabberwocky.”  “Counting off is the process of working up to achieve her goal.  I get chills every time I see it, read it; when I wrote it,” Woolverton confesses.

Does Woolverton have her own personal list of six impossible things to believe before breakfast?  She laughs.

“This movie is slaying my own personal Jabberwocky,” she admits.  “The fact that’s it’s been embraced by the world is something I can check off the list.  But the challenges are always out there—there’s always a Jabberwocky, it’s always changing, which makes you constantly good—always striving, always working.  My next Jabberwocky is to do it again.”

Does believing in six impossible things before breakfast have a particular relevance for Woolverton as a mother?

“My whole MO with my daughter was to raise her to believe that she can do anything, be anything, accomplish anything she wants.  Everything I’ve ever written is for my daughter.  There are characters in my work that are her.  Alice is for her.  She’s 18 now—but she doesn’t need it.  She’s very strong and confident.”

“This is my dream,” declares Alice.  “I’ll decide where it goes from here.  I make the path.”  It’s the purest expression of what it means to be a protagonist—in a movie, and in life.  “Alice, at last,” says Absalom the caterpillar, as she makes the choice to fight the Jabberwocky.

But isn’t this what life is about?  Aren’t we all dreaming six impossible things before breakfast?

Woolverton agrees.  “We’re on the verge of women ruling the world, if we raise our daughters to believe in themselves.”

Alice in Wonderland is released on Disney DVD and in a Blu-ray TM /DVD Value pack on the 1st of July 2010.

Tim Burton: The Exhibition is currently on display at ACMI in Melbourne until Sunday the 10th of October 2010.

Watch it again after you listen and learn

the movie is a mystery to most people who see it but it makes perfect sense based on the original books, especially Alice Through the Looking Glass

the director and writer are intuitive people and were probably not aware of these analytical specifics but here they are:

The book can’t be read, so she holds it up to a mirror in the Looking Glass world..

Seen through the other looking glass, already inside a looking glass world, oddly enough what she reads in the book appears to be from some third parallel world in this other mirror.

She sees the poem “Jabberwocky” and reads it aloud. The words are not of this world or the looking glass world and present what appears to be a third story written in it’s own book with illustrations.

The story tells of a monster called the Jabberwocky and a boy who comes to slay the beast and battle general wickedness with a special sword and save the day.

Oddly enough, the illustration in the looking glass book by John Tenniel, the original artist, shows Alice swinging a large sword
At the Jabberwocky, and no boy at all.

This has always been a mystery. As the Red Queen says in the new film-“I’d know that tangled mess of hair anywhere” when she looks at this exact drawing taken from the original book on the compendium.

The Mad Hatter refers to Alice as “him” and tells her the Jabberwocky poem is, indeed, all about her, and I believe never acknowledges her as a girl.

This point is hammered at the start of the film when Alice objects to being quantified as a female or the weaker sex multiple times in the prologue.

And she is wearing a skirt when confronting the Jabberwocky in the illustration. Her hair looks exactly the same style as all the other drawings in the book and she wears a bit of armor or chain mail.

The basic concept of the film is simply that when Alice picked up the book and looked into the mirror again from the looking glass world, she appears to have looked into her own future.

This point is brought to bear in the concept
Of the Compendium– a series of illustrations showing the events of each day- past, present and future, indicating Alice not only could have easily seen into her own future In a book or compendium in the looking glass room, but also that all the characters including Bayod, the blood hound, are aware their future has been foretold in this method of transmission of information  and their lives are something like museum pieces recreating the story of Underland.

Conclusion: a proper return to Wonderland as thru the original material would indeed be right in assuming the third story in the future would explain why it was Alice illustrated fighting the Jabberwocky and the Madness of the poem itself is everywhere reflected in the distressed, repressed and deconstructed dreams of a child reaching adulthood and the world of madness as an alternative to growing up – a theme mentioned directly several times in the prologue and the film – that all the very best people in the worlds are not responsible, conservative adults, but quite mad, you see..

While the rest of the world has been focusing on the BP oil spill in the Gulf and attempting to deal with the distressing...
© Onya Magazine 2009 - 2020
Back to top