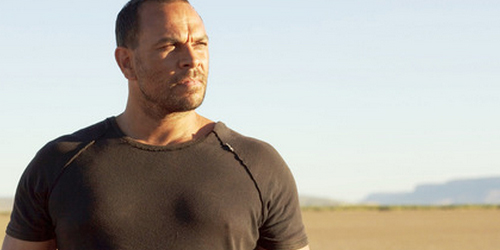 The Australian film industry’s knack for surprises continues with the release of Mad Bastards, an Indigenous drama headlined by first time actors and directed by documentarian Brendan Fletcher. Dean Daley-Hughes stars as TJ, a “mad bastard”, who sets off on a journey across the country to visit his estranged son Bullet (Lucas Yeeda). While doing so he evokes the wrath of Bullet’s mother Nella (Ngaire Pigram) and the local police officer Texas (Greg Tait).

While Daley-Jones is not a known name in the Australian film industry, that is set to change with his performance in Mad Bastards, receiving high praise from critics and wowing audiences during showings at the Sundance and Adelaide Film Festivals.

Matthew Pejkovic spoke with Dean about his background, his performance, and what it means to be a “mad bastard.”

You were working as a roofer prior to Mad Bastards?

Yeah, I was in Broome working for a shed building company, Northwest Shed Masters. I was basically an all rounder, you know? Originally I came to Mad Bastards as a grip, because I had numerous years of experience working in different departments in the film industry. Art department, lighting…I was taken in by a wonderful key grip here in Sydney by the name of George Tsoutas and Toby Churchill Brown.

They introduced me to the film industry along with a bunch of other guys, and they just opened up all of these doors for me and let me be involved with filmmaking, because that is what I’ve always wanted to do: take my knowledge back to Western Australia and work with the indigenous community and with other people in the media, so I can teach our own people how to make films, so we can make films about ourselves.

How did you get cast in Mad Bastards?

Well I was introduced to Brendan through Ngaire Pigram, who is a good friend of mine and plays Nella in the film. We were in Broome and she was gonna have a meeting with Brendan and asked if I wanted to meet him. So I said yeah, met him and it turns out he had known some people I worked with in Sydney, and so he hired me as the grip in Mad Bastards.

A week later he calls me up and says, “I would like to talk to you about the film a little more.” So we got together, and he asked if he could know a little more about myself. I think he heard through the grapevine that I had a bit of a colourful past, so he wanted to hear some stories about that. Then he asked me to do a screen test, and here I am. (laughs)

You’ve said that the film was a cathartic experience? Could you delve into that a bit further?

Well the film is not about me, but there is a lot that I have experienced in my own life that fed into what the character of TJ was going through. The challenges and the demons, stuff like that, but if I were still like that I don’t think I could have delivered that performance. I am more at peace at myself and with the world, even when I met Brendan. I am still on my journey and will be for the rest of my life, but I’m not that crazy “mad bastard” any more. I’m now a good “mad bastard”.

How much of your performance relied on the screenplay, and how much relied on improvisation?

Well, we sort of… Brendan and I lived together. We’ve been sharing hotels and stuff for years now, so I would share things and we got to know each other very well. I trust him like a brother, and that’s the truth. He knows everything about my life, and I wanted to make this film feel real because I knew where he was going, what he wanted to do, and how real he wanted it.

So at times if he knew I was upset with work or whatever, he would ask, “Are you alright mate?” And I would say, “I’m having a bad day. I’ve got that little man inside of me with an axe.” Then he asks, “Can I use that in the film?” and he did.

Then he would ask, “Tell me about when you were a kid”. So I told him that during the first Christmas that I can remember, I lived in a women’s refuge centre with my mother and one of my sisters, and we lived across from Fremantle prison. My mum got married to her husband in that jail and divorced him in that jail a few years after, and he gave me a wooden toy when I was four years old. And the Brendan asked me, “Can I use that in the film?” And he did.

Obviously for that scene I had to consult my mum, because that was a full on moment in our lives. I will never forget the tears in her eyes when I kept asking “I want to go home. I want to go home”, and we couldn’t because there was nowhere else to go.

Brendan was very sincere about that and considerate. There are things he knows about me. Even with the fight scenes and the violence, we toned that down compared to what it was like in real life. 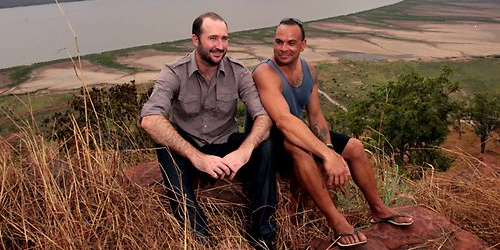 Your performance was very physical. Even in the quiet moments you display an intensity. Brendan Fletcher has mentioned that you have a history in dance. Did that help in portraying your characters physicality?

Yeah. The high school I went to was a performing arts school called John Curtin in Fremantle. Paul Mercurio went to the same school. I did it to have a mess around with some drama and theatre arts, but I also did some dance and some physical ballet for 3 years. It taught me how to carry myself and how to be strong. Classical ballet made me into a better football player, it give me co-ordination and a lot of other things.

On the other hand I had the guidance of Ngaire Pilgrim, who’s a professional actress. Also there is the talents of Allan Collins, our cinematographer who worked with so many indigenous actors in Australia for so many years, and who gave a great bit of advice:  “If you think about the emotion in the scene, the camera will read it in your eyes”. So I am happy with my performance. It felt like I was being taught at the same time, and I picked up some valuable little learning things, and I can use that in my future projects.

I felt the film was essentially about manhood, or what it is to be a man. Is that the primary message that the film is promoting?

Exactly. That was my main purpose for being involved. This is a story about a man who wants to change his life around, turn a new leaf in his life, and you get a feeling he is doing that in the end. This is gonna inspire other people. Not just aboriginal men in the community, but people around the world, which is happening. Ever since it came out, it’s been a universal story. So that’s really good, because if we can help through our story and through our way of interpreting it, as in from an aboriginal point of view, and people receive it like that, it would be great.

It was just unreal! It was the first time I had ever been overseas, first time I’ve ever seen snow. The whole 12 days I was there, waking up and looking outside my windows and wondering “What the f—?” at these big icicles hanging over the window and snow everywhere…it felt like I was in a Bing Crosby movie (laughs). It was just beautiful.

What’s next for you? Are you looking to move into film acting on a full time basis?

Well I have a manager and other great people who take care of me, and my name comes up now. What I want is for people to get me their script, and if I like it I’ll say “Yeah, I want to do it”, then I focus on that script, portray that character, and deliver it the best that I can. I’m also in the film Toomelah (by Ivan Sen), which is going to the Cannes Film Festival, so I’m proud of that. Plus I’ve met a producer for another film, which I hope will get going at the end of the year.

Combine an infusion of the world’s finest berries, Madagascar vanilla and cognac and what you arrive at is the exotic...
© Onya Magazine 2009 - 2021
Back to top