My friends have similar systems. Some of them alphabetise by director. Being a film geek, I find this system appealing, but there are problems. It does mean splitting up certain series. Harry Potter would be in four different places. The Star Trek films would be all over the place, which, I must admit, is somewhat fitting given the Star Trek films are all over the place. As much as I appreciate it, I must admit I think it an imperfect system.

I’m sure some of you are laughing scornfully now (also known as lolscorn), because you believe all of this is useless and has no practical value. You would be wrong.

Many years back, I began working at a video store — Reel Time Video, to be precise, now defunct — and with few customers, I had very little to do on my first night. It was also quite apparent to me that nobody else in the store really knew anything about movies. There was a lovely and sassy elderly lady who used to own the store and worked there part time, the Chinese woman with little-to-no English who had bought it from her, and the manager, a middle-aged woman who wasn’t a huge film buff but still had enough basic knowledge to get by. Most of the sections were in a complete mess, so, on my first night, I stood in front of the science fiction section (comprised mostly of Star Trek videos) and placed them in alphabetical order, and the many Star Trek videos in chronological order. When I was done, that thoroughly unattractive mess had transformed into a pretty decent-looking collection of SF film and television. That night, the usually-ignored SF shelf had at least three people in front of it at any given time, and twelve Star Trek videos were hired out. Not a single one, I later found out, had been hired in over three weeks prior to that night. Over the next few shifts, I did the same to the other sections, with similar successes. Don’t tell me an anal-retentive adherence to shelf order doesn’t have any value. That said, I personally made no extra money for my efforts. My ordering had a financial reward, I just didn’t see any of it. 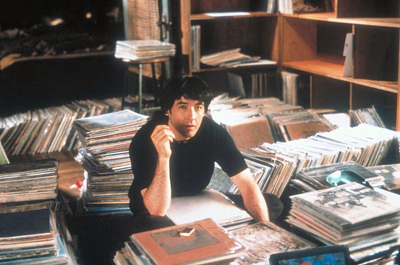 Those of us who care about these things have an innate understanding among one another. Go buy the High Fidelity movie. In the scene where Todd Luiso is trying to figure out how John Cusack is ordering his record collection and suggests “Alphabetical” and “Chronological”, when Cusack says “Autobiographical” and Luiso says “No fucking way”, if you laugh knowingly then you’re One Of Us and nothing I’ve said so far will sound strange to you.

One Of Us means you have a very specific way of ordering these things, even if it’s completely different from my own system. The differences of details may be different, but broadly speaking, we’re on the same page. Look, what you do in the privacy of your own home is fine. Store them by barcode, or even by production designer, if you like (but never by Golden Globe nomination). Despite the desire I’ll have to reorder your shelf when I’m visiting you, I’m truly fine with whichever way you choose to store you own product. However, keep it in your home.

DO NOT take your twisted, unnatural, and possibly heretic ordering system out of your house and into whichever store you’re minimum-waging at. We live in a society, people, and as such, we need our shelves to make sense. Nearly every single store I’ve visited in Australia has made a mockery of logical categorisation. Examples:

– A popular music store I frequent likes to mark the delineation between “Popular” and “Alternative”, but “Alternative” isn’t a real genre. It’s a made-up retailer genre. When “Alternative” music starts selling really well, it suddenly becomes “Popular” (as evidenced with a sticker I saw on the “Alternative” section for The Streets, which read “Also Popular”, a statement I take issue with for many different reasons). Having a working knowledge of different musical genres is good. An assumed knowledge of charts and sales figures is not. I’m not saying lump it all in together so that Mozart is next to Motorhead: separating “Country” and “Hip-Hop” makes sense; separating Radiohead and Coldplay because there’s some accepted logic is that Radiohead is “edgier” is not.

– In a video store chain, I found Walkabout and Picnic At Hanging Rock in the “Foreign” section. If you’re too young to have heard of those films, prepare to have your mind blown: they are both Australian. The video store I was in was in Australia. They were, I shall repeat, both filed under “Foreign”. “Foreign”, in this case, clearly meant “Arthouse”, or perhaps “Fuck, my tiny brain really doesn’t understand this film!” Technically, if you’re going to have a “Foreign” section in a video store in Australia, every film that isn’t Australian should go in there, which includes everything from Hollywood. If by “Foreign” you mean “Foreign Language”, you should probably leave out Walkabout, Down By Law, and Secrets and Lies, which, last I checked, were all in English. If, however, you want them all lumped together and kept away from “normal” people hoping for a standard comedy or action film, call it all “Arthouse”. It’s a step up from “Foreign”, even if it’s mostly just as rubbish. Why rubbish? Because it’s the same problem as “Alternative”, where you kind-of need a working knowledge of box office returns. Name me a film that should go in “Arthouse” instead of a more traditional genre (“Drama”, “Comedy”, etc) and I’ll show you a mainstream snob who dismisses films that don’t have “broad appeal”. (Disclaimer: Jim Jarmusch and David Lynch don’t count. They should have their own sections, so that the video store partitions read “Drama”, “Action”, “Comedy”, “Romance”, “Jarmusch”, “Lynch”, “Kids”, and so on.)

– Bookstores, which are usually a bit better at this sort of thing, have a similar problem. Many make the distinction between “Fiction” and “Literature”, which is essentially the difference between “Good” and “Bad”. Is Nick Hornby fiction or literature? It actually depends upon which store you’re in. They’re wearing their snobbishness on their sleeves when they split books up into these categories. At least if they’d call one of the sections “Airport Rubbish”, I’d be impressed by their honesty.

– Hell, even my favourite bookstore in the world (Fuller’s in Hobart) did something I found ridiculous: they don’t have a “Science Fiction/Fantasy” section. Now, that didn’t bother me too much personally as I don’t read a lot of it, and the lack of the section would make sense if they didn’t stock any SF/Fantasy books… but they did. Where were they? Under the heading of “Speculative Fiction”. Clearly, the store is too high-brow to admit to having science fiction or fantasy in their collection, and have hidden it under a redundant title designed mostly to obfuscate. Why redundant? Well, isn’t all fiction, at heart, speculation? Isn’t the term “speculative fiction” an oxymoron?

Somehow, I feel that if I were to address any of these points to the people who categorised them (particularly the video and music partitioners), I’d be met with a dismissive “Oh, but everyone gets what we mean”, which is a particularly favourite phrase of mine, usually evoked when the user can’t bring themselves to be clear in the first place. Are not these categories designed to help us find what we want? Are they not supposed to make our lives simpler? Why then can I not find Chuck Palaniuk books in “Fiction”, or The White Stripes in “Popular”, or My Brilliant Career in “Drama”?

Or am I the only one who cares about things like this? If so, I shall give up my battle, and, out of spite, see if I can get this rant categorised as a Technical Manual.

This was hilarious! (and scary that I relate to so much of it!!) I used to have CDs and DVDs stored alphabetically, and am a complete freak about it – I would know when my housemate had borrowed one cause she never put it back in the right spot!! Then I moved into a flat with no space and the DVDs/CDs are stored under my bed in rollaway units. Its chaos. There is no order and when I decide which I want to watch it takes me nearly an hour to find it – I swear sometimes I am nearly in tears by the time I manage to locate said DVD and by which point I don’t want to watch it anymore anyway. Systems are good. Systems work. Systems make the world a BETTER place!!!

I agree wholeheartedly with most of the above, but do have one very small bone to pick…

I think you’ll find that ‘Speculative Fiction’ (known to those who know as ‘SpecFic’) is a widely-accepted umbrella term for a broad range of fiction that falls into many smaller categories (such as science fiction, fantasy, horror and supernatural), dealing with themes that are accepted to be outside ‘reality’ in some way, shape or form.

That said, the manner in which it’s decided what is ‘speculative’ and what is not, and therefore on which shelves books should sit, is certainly riddled with problems. Peter Carey? Margaret Atwood? ‘The Time-Traveler’s Wife’? Anything about vampires? All can be readily found on a general ‘Fiction’ shelf, two are often classed as ‘Literature’ (I’ll let you figure out which ones) and some others would sit pretty happily in your brilliantly-conceived ‘Airport Rubbish’ section… yet all are Speculative Fiction.

Yes, all fiction is speculative… Yes, the term is something of a tautology… But if the bookstore you mention does, indeed, include other genres of speculative fiction (and not just science fiction and fantasy) on these shelves, then they have merely been using fairly commonly-known genre terminology and are more correct than most in their naming of the section. They could be attempting to clarify rather than obfuscate. I’m sure many writers of horror are horrified to see their books lumped in ‘SciFi/Fantasy’, which does nothing to point the browser to their work.

It seems to me that the only way to solve the problem is to make like the bookstore where I earn my minimum wage, and not label the sections at all. We, the employees, know which is literature, which is speculative and which is rubbish (though they are, in fact, all thrown in together in one big joyous celebration of the fictional – carefully alphabetised by author surname, I might add) but as far as the customer is aware there is no discrimination whatsoever. Everyone wins!

But what I don’t understand why you didn’t go all the way?

Why do bookstores have SF/Fantasy section when they should just be call Star Trek/Star Wars/Harry Potter/H R R Tolkien. There’s never any real Sci-Fi, it’s pretty much the above named and a few Dragonlance series.

Or wait they do have Asimov, whoa.

And another thing, why can’ they separate the two? I don’t remember reading a lot about hobbits flying the Millennium Falcon.

My first opportunity with Onya Magazine was an interview with Australian country music band The McClymonts. I’d never...
© Onya Magazine 2009 - 2023
Back to top