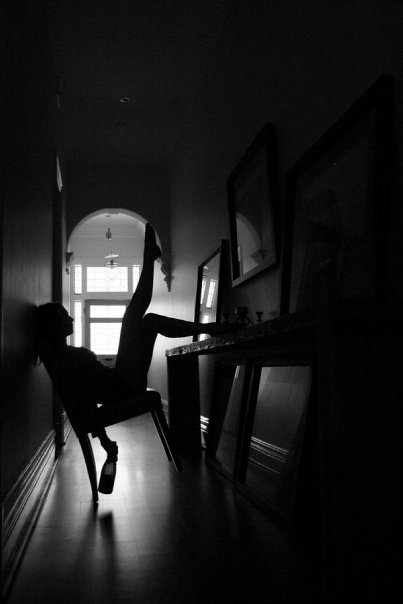 He was walking back towards me now; an assortment of tools clutched in his large, ape like hands. Rope. Duct Tape. Garbage Bags. Fuck.

It’s now or never. I spotted the knife sticking out of his jeans pocket.

He bent down over Hollie, roughly pushing me out of the way. “Move it,” he grunted as he jerked his head over to me, “tie up her feet.”

I gulped. Now. “Robbie,” I tried my best to sound seductive. I placed my hands on his broad shoulders and, in attempt to take control, spun him around. “What the…?” he began, but I placed my lips on his; silencing him. I pulled away gently and whispered into his ear, “She meant nothing. I thought you would like it.” I could feel his head nod as I placed tender kisses on his neck and shoulders. “I did.” I pulled his black muscle shirt up and over his head, obscuring his vision as I set about my plan.

His hands found my bare waist and as I wrapped my arms around his neck I held on tight to what I hoped would be the answer I was looking for. I kissed him again, this time longer than before and as I could feel him starting to relax I bit down. Hard. “Fuck!” He exclaimed as he clutched at his tongue.

Thud. I plunged the knife into his back and twisted it. Pulling it out, I couldn’t help but grin at the fresh smears of blood staining the sharp steel. He screamed out and tried to lunge at me, the pain in his back to painful for him to move. He fell back on to the floor, next to my Hollie and winced as he tried to roll over. I pushed him down, sitting on his chest. That glimpse of fear I had first seen his eyes had returned, fully blazing. He knew this was the end.

I laughed at him as he tried to push me off. His eyes transfixed to the knife I clasped in my hand. “Bye Rob” I said sternly. “Have fun in hell.”

Thud. Into his chest.

Thud. Into his heart.

He stopped struggling. His arms fell limp at his sides and his head lolled to the left. Suddenly I felt as if a great weight had been lifted off my shoulders. For five years I had to endure his insults, his abuse. With Hollie everything had been different. She was my angel, and now she was gone. I had lost her to the very thing I was trying to escape from.

I heard sirens approaching. As they grew ever closer I began to feel nervous. Would they take me away? I stepped over my husband’s limp body and lay down next to Hollie. I removed my ripped blood soaked t-shirt from around her torso, gently, as if she could feel my every move. The knife wound gaped up at me, resembling a crooked sinister smile; sneering as if showing its approval of what Rob had done. I ran my fingers along the gash, closing my eyes as I rested my head on her shoulder.

The sirens were here. I could hear people coming, their footsteps, they were calling out for me.

“I don’t want to leave you”, I whispered to her, brushing her long brown tresses behind her ear. I had begun to cry again, my tears stinging my cheeks as they cascaded freely.

“I want to be free, with you,” I said to her as I heard the ambulance officers kick open my door.

“Is anybody here?” they called out. “No,” I whispered, as I plunged the knife into my own heart.

Wow! I had a feeling (a hopeful feeling) that Monica would stick that knife in her horrid partner’s back, but I did not expect this ending. Total shock! Great job, Jessica. I look forward to more of your writing. 🙂

You are such a talented writer.
That was simply a brilliant story.

Extremely impressed by the final installment, and of the whole story. Thought the ending was excellent as is wrapped it up beautifully, without dragging it out. Action packed and not longwinded. Perfect example of a short story, and a hint of what is hopefully to come from budding talent. Well done Jessica, you should be proud of what you have produced. 🙂

amazing! totally gripping from beginning to end! i look forward to reading so much more of your work! i just don’t have words…