Missed an installment? Catch up: Part 1 and Part 2. 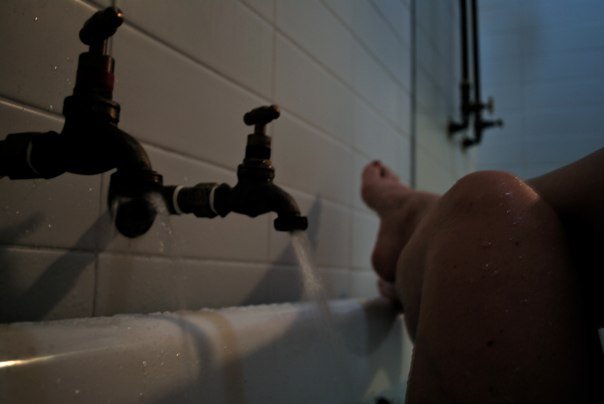 He caught us together. I didn’t know he’d be home so early. I tried to explain but he didn’t care. His eyes were fixed on her…they had changed. They were dark. Lifeless. He was angry. My heart began to beat faster, I knew that look all too well. He got that look when he was called out on a job; when he saw how a puny little punk teenage kid could destroy a family so easily with a can of petrol and a match.

Hollie clung to me the entire time. I heard her muttering to herself as we cowered into a corner. Her arms wrapped tightly around my waist. Warm. Comforting. With her next to me I felt like we could beat him. Even then, when he loomed over us, and I felt her warm tears cascading onto my shoulder, all I wanted to do was kiss her. Tell her that it was all going to be okay.

Then he did it. He broke my heart by taking away the one thing that I found that made me happy. She gasped as he plunged the butcher’s knife into her chest, twisting it inside of her. I held her tighter as I began to cry; she was wincing in pain as blood poured out of her open wound. “Don’t go!” I cried, as I desperately tried to stop the bleeding with my hands. “Don’t leave me!” I yelled.

He just stood there, a sinister grin plastered across his ugly contorted face. “You…You…” I stammered, as I tried to search for the right words. “You…devil!” I yelled, the knife still clasped tightly in his right hand, glistening, reflecting the setting sun streaming in from the window. Hollie’s blood dripped down the stainless steel knife, barely making a sound as it fell onto the white tile floor, forming a perfect round droplet. “That’s what happens to people like her Mon…People who try to destroy families. They get punished.”

I winced, anticipating the same fate as my beautiful Hollie. Nothing. He just watched, as I continued trying to save my lovers life.

She was calling out to me, trying to grasp my arm, “Monica,” she rasped, her face was starting to lose its colour and tears were streaking down her cheeks. I brushed them away with the side of my hand and held her head close to mine. “It’s going to be okay baby,” I whispered soothingly, kissing her on the head. My mind was racing. He had walked away, I couldn’t see the knife. The phone. Where is it?

I lunged at my mobile phone. Only a few seconds had passed. She still might have time. I felt her pulse grow fainter and fainter as I whispered into the phone. He still hadn’t returned. Please hurry, I willed them as I removed my t-shirt, ripped it into strips and bound it around her stomach, hoping to slow down the bleeding.

Oh, brutal! Looking forward to the next installment to find out what happens next! 🙂

The S.L.A.M Rally (Save Live Australia’s Music) is a non-politically aligned, independent entity made up of musicians...
© Onya Magazine 2009 - 2020
Back to top