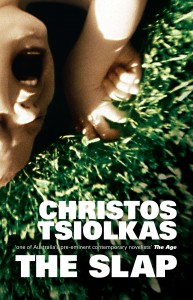 When it comes to contemporary authors, not many can write a powerful plot driven novel and succeed. Yet, Australian author Christos Tsiolkas achieved this in his recent novel The Slap. Set in middle class Melbourne suburbia, The Slap examines the notion of family and child rearing after a misbehaving toddler is slapped at a suburban barbecue by a stranger. This incident not only results in serious consequences for the person who hit the child, but for the child’s parents and the people who were present at the barbecue.

In order to examine this effect, Tsiolkas tells the story from the point of view of eight different characters who witnessed the incident. Each character is uniquely different. They all have their own opinions on whether it was acceptable to hit someone else’s child. This incident drives a wedge between the friends who were present at the barbecue. It forces each character to question not only their families, but how they have been raising them. As a reader it is very easy to draw yourself into the world of the characters.

Tsiolkas has an amazing ability to capture everyday life in the purest of forms. The reader will easily relate to the characters, understand why the child was slapped, disagree with the actions taken or sympathise with the child’s parents. Just like the characters in the novel, the reader is forced to question what they would do if they ever faced a similar situation. Would they slap someone else’s child if it means protecting their own? Despite the questions raised, the reader certainly won’t be disappointed with the outcome. There is no doubt that Christos Tsiolkas is a gifted writer who isn’t afraid to push boundaries with his work and The Slap certainly delivers.

The Perfect Weekend in Daylesford