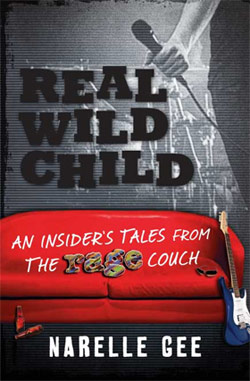 Real Wild Child by Narelle Gee is, as the tagline of the book tells me, a collection of insider’s tales from the rage couch.  Gee was the head programmer for rage for almost fourteen years, and over that decade-and-a-half she certainly heard, saw and participated in some crazy stories.

Gee was in charge of organising local and international rock stars to guest program rage: that is, a musician would come in, sit on the famous couch, pick ten of their favourite/least favourite/personally important music videos from other artists, and talk about them.  Each chapter of the book focuses on a different artist, discussing the conversations that occurred while filming, the musician’s music video selections and any amusing anecdotes.  Musicians and bands in the book include Hole, Smashing Pumpkins, Ben Lee, Gwen Stefani, Outkast and many, many more.  There’s a refreshing mix of pop stars and punks, screamo bands and female singer-songwriters, Australians and international acts.

Unfortunately, Real Wild Child provides a frustratingly shallow look at superstardom.  Rather than delving deeper into the stories of the artists, and providing much of a back-story to their career, Gee introduces the artist and then quickly discusses their video choices. With individuals like sometimes-train-wreck Courtney Love on the couch, there could have been a much more interesting perspective presented.

This disappointment aside, the book also assumes knowledge of many of the rock stars, which can be confusing for a less fanatical reader. Many artists are introduced by name, without it being clear what band/s they are from, whether they’re commercially or critically successful, or even what kind of music they make. Unless one has been watching rage religiously, for the fourteen years Gee was head programmer, there are likely to be a few chapters that need more explanation.

Real Wild Child is filled with interesting stories, to be sure, and it seems unfair to criticise the book for its style. After all, as Elvis Costello once said, “Writing about music is like dancing about architecture.” It can be difficult to capture the tone, the sound, and the atmosphere of music. Even more difficult, perhaps, to convincingly describe the certain swagger in the walk of any rock’n’roll artist or, the sheer sex appeal they exude on screen. But the style is mostly adolescent, instead of adult. Both in the sense that some of the more forced chapter endings are unsophisticated; but also because when talking about sex, drugs and rock’n’roll, you can only get so far without mentioning sex and drugs.

Real Wild Child is a somewhat disappointing read, if only because it could have been so much more. Seeing many of my own favourite bands and artists included in the index, I was looking forward to a deeper, more personal look at their views on music and their time on the rage couch.  Instead, the book read like an episode of rage. It’s fun, to be sure – but hyperactively edited, brief, and leaves you wanting more. A lot more.

The Onya beauty team is oh-so chuffed to introduce our very own Resident Hair Guru, Ms Freda Rossidis. After 20 years of innovative...
© Onya Magazine 2009 - 2021
Back to top