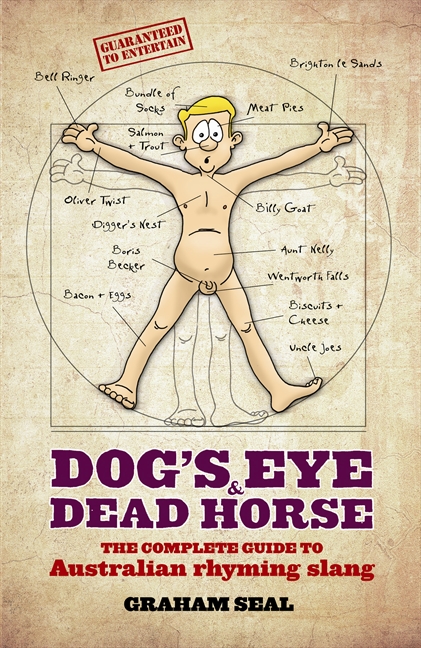 Since colonial days, Australians have used rhyming slang with great flair. It’s important that we treasure the old favourites we know so well: dead horse (sauce), cock and hen (ten), Ned Kelly (belly) and learn new additions such as Britney Spears (beers). Why? Because there’s something unique about speaking a language such as English that’s spoken all across the world, but only being able to be understood by people who ‘get’ what you’re going on about.

Did you know that a Barossa Pearl was a girl? Or that cheap and nasty is a pasty? Or that a cattle dog is a catalogue? Or that telling a John Dory means telling a story? Dog’s Eye & Dead Horse is full of them – full of thousands and thousands of translations and explanations. The guide features an A to Z section of slang for quick and easy searches, as well the luxury of having rhymes grouped by themes.

Graham Seal is also the author of These Few Lines, which won the National Biography Award in 2008. He is currently the Professor of Folklore at Curtain University in Western Australia.

Witty, quirky, perverse and definitely worth a ‘Captain Cook’, Dog’s Eye & Dead Horse is an essential guide in modern times – essential in understanding the Australia of old, and also in preserving exactly that.

By Sarah Kempson The festive season had barely begun when the text messages and emails started… ‘This is a courtesy...
© Onya Magazine 2009 - 2020
Back to top