An exhibition over ten years in the making, Luccio began collecting used postcards from New York’s flea markets, museums, antique and second-hand shops on his first trip to the city. In the artist’s words, he was drawn to their ‘beautiful, tactile and fragile beauty’ and the stories they conveyed as ‘precious intimate artefacts and remnants of the past’. While Luccio confesses that working over the hand-written messages often felt like ‘vandalism’, the final result is ultimately both a preservation and elevation of ephemera into enduring art. One piece features over 100 postcards in one frame, creating a monumental mosaic representing aspects of civilisation and art history through striking and memorable imagery.

A kind of reverse archaeology, the small, penned stories excavated by Luccio from New York’s dusty boxes are layered over with sketches, paintings and prints created during the artist’s frequent drawing excursions to the Metropolitan Museum of Art. Renditions, interpretations and juxtapositions of famous artworks by Picasso, Modigliani and classic Greco-Roman sculptors adorn the cards, often leaving tantalising glimpses of the hand-written messages, stamps and postmarks underneath. While the style and use of serendipity is unmistakeably Luccio’s, there is often a delicacy to this small-form work that is a delightful addition to the artist’s métier. In place of the large-scale pieces that have characterised Luccio’s recent exhibitions, the audience is invited into the expansiveness of the daily drawing practice—the constant searching, exploring, playing and discovering—that underpins Luccio’s continued artistic evolution.

A highlight of NEW YORK POSTCARDS is that Luccio’s original sense of the postcards, as precious and intimate, has been preserved and expanded for the viewing audience. The multiple layers of story found on each work invite both close, detailed inspection and an invigoration of the imagination—they draw viewers in and entice us to take up the role of the ultimate story-weaver. What do these layers of meaning mean to us? What can they tell us of what is lost in our information technology-dominated, throw-away culture? Can we know what will ultimately become of our own small attempts at communication and connection? There are depths to be plumbed here, depths that complement and enrich the aesthetic beauty and impact that is a defining feature of Luccio’s work.

Visitors to NEW YORK POSTCARDS with a penchant for mysteries will receive an extra treat in fortyfivedownstairs’ small gallery, which is hosting a second Luccio exhibition—IMMAGINARIO—a series of monotypes. A departure from Luccio’s recognisable cityscapes, IMMAGINARIO explores new landscapes and realms, showcasing the diversity of his artistic practice.

Marco Luccio is represented in over 40 public and corporate collections internationally, including several museums such as the New York Public Library, the Museum of the City of New York, the National Gallery of Australia, and more.

NEW YORK POSTCARDS will be exhibited in Chelsea, New York in June 2019. 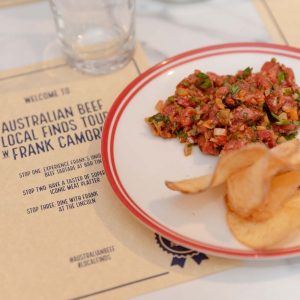