First published in The Hillscene.

Japanese born Chaco Kato is right at home in Melbourne’s hills. She moved to Australia with her husband Testuta while they were both studying and when their daughter started school they decided they should settle down in the Dandenong Ranges. They moved up to the hills because they “loved the countryside and Belgrave so much.” It had everything they needed, a good school and it wasn’t too far away from the city arts culture.

Chaco is an installation artist who works both individually and as part of an arts collective called “Slow Art Collective”. Her work moves beyond the conventional 3D works of sculpture, which is traditionally static and monumental with a more feminine approach, which is quite flexible, soft and transparent. She uses a lot of ropes, strings and threads, suggesting the minimal element of a line in creating a drawing in space. The intricate works which occupy their space are quite interactive and are made to be tactile. “I like people to be a part of the sculpture so my piece is completed when someone steps into the space and moves around,” says Chaco. 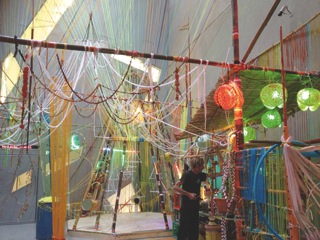 Being responsive to the site is very important to Chaco’s work as a means to not controlling everything. Meaning Chaco likes to have a lot of time at the site exploring it’s potential before starting work. “The attitude I usually have to the work will depend on what the space allows me to do and I have to have lots of time to have a conversation with the site. What does this space want me to create? What will the shape be like? All those things.”

Not having total control is one of the reasons that Chaco created the ‘Slow Art Collective’. She wanted to work collaboratively with other artists with similar ideas. “I thought it would be very important to get away from the artwork as my own creation but actually more blurred between who has created this part or who is the viewer.”

The collective includes Chaco, Tony Adams and Dylan Martorell. All of them are distinct artists with very different backgrounds but they’re interested in the same idea of being very responsive to the site and the impermanence of the work. Tony’s strength is in heavy duty sculpture and building big scale works and Dylan uses found objects to piece together in the space and “creates amazing soundscapes as well.” These three artists are the core group who occasionally work with other artists depending on the project.

Their work is progressive and contemporary and has therefore been selected for ‘Melbourne Now’. It includes the work of over 175 individual and group presentations over many disciplines at the The Ian Potter Centre: NGV Australia and NGV International as well as some offsite and special projects. 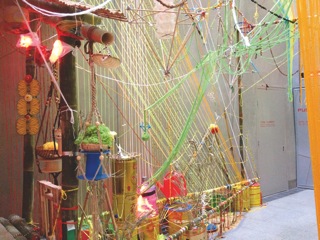 The space they were working in was very interesting but difficult as it’s a space between buildings like a bridge with high ceilings. They weren’t able to adhere things to the walls or floors and had to have free access. Their solution was to make the structure out of bamboo because it’s easily accessible, very light and versatile and can be recycled, plus they were inspired by the Asian aesthetic as well. They have created a big workshop based installation called ‘Malarky’, which has no meaning, so they gathered lots of meaningless stuff from everywhere and put it together in a way that creates different spaces. “So that’s the basic concept, people can go through, people can rest and sit and there are a lot of sound elements that people can touch. All three artists were bringing in their own expertise to recreate something very different from their individual practice.”

They will have workshops for children as well. Chaco does a lot of work with children and loves it. “They are very quick and energetic and they have a life force when they are creating something. They love to make something, so it’s great to be inspired by them. Seeing the energy and pleasure they have in making something assures me, that’s why we need artists in this world,” says Chaco.

Another of her talents is illustration, she’s a children’s book illustrator for Japanese books mostly written by her husband Testuta Watanabe. She originally studied creative writing but switched to art when she worked at a magazine and found that she preferred illustration to writing. Drawing is her first love and is evident in her installations through her intricate thread work.

Her art and enthusiasm for creating has led her to study and work around the world in Japan, America and Paris, and now to call Melbourne home.