Beneath Melbourne’s matte-grey winter skies, The Royal Exhibition Building has been hiding a riot of colour, like a tightly furled bud waiting patiently for a warm day to bloom. Paintings, sculptures, photography and multi-media installations have been gathered from around the country, and some from overseas, and stowed to hang quietly within the soaring walls of the 19th century Exhibition Pavilion. As the doors were swung open to the bustling crowds on August 4, and the rich cornucopia of colours revealed, the works of art have been joined by a steadily growing number of little red dots.

It appears this year’s Melbourne Art Fair, the first since the global financial crisis, has managed to bloom despite the economic frosts. A number of stands have already sold all their work, according to Melbourne Art Foundation board member Andrew Cameron.

“Sales certainly were positive from most of the stands last night (Wednesday August 4),” Mr Cameron said, speaking from the Exhibition building’s second floor, which looks down upon the hustle and bustle of collectors and viewers on the floor below.

“Looking down there’s a lot of activity going on … there would be sales happening right now as we talk,” he said.

But Mr Cameron concedes buyers’ attitudes have changed since the last Art Fair in 2008, which drew in 30,000 people and resulted in sales of $2 million.

“People are being much more considered.

“Two-years ago it was a frenzy, the art market was really hot, people were buying things spur of the moment, not placing things on hold.”

However, his view of the Australian art market is optimistic.

“I think the feeling here [in Australia] is more upbeat … I get the sense there are red dots popping up, the collectors are here…”

“It’s certainly been through a tough patch, but I think it’s very reassuring to see how many galleries have been able to participate this year, because it’s not cheap to participate.”

The Melbourne Art Fair is displaying works from more than 90 galleries, mostly from Australia, with art from more than 900 artists hung on the maze of white walls erected for the exhibition.

Mr Cameron says demand from galleries and organisations’ wishing to set up their own stall was strong, with only the best selected from around 120 to 130 applications.

“The galleries have to make a submission to us to explain what they’re going to do … because we’ve got plenty more people who’d like to get into the fair than we can accommodate,” he said.

This has not always been the case. The garden of art that now springs to life in the middle of the Fitzroy Gardens every two-years was once more comparable to a sparse few determined flowers in a stretch of otherwise barren earth. In fact, 30-years ago, the Melbourne Art Fair first shared its exhibiting space with the rather more practical showings of a heavy machineries fair.

“What’s happened is that it has grown to the point now where we take over the whole of the Exhibition building,” Mr Cameron says.

The Melbourne Art Fair is now on the same scale and calibre of other international fairs in New York, England, Paris and Scotland, among others, according to Mr Cameron.

“I go to a lot of these art fairs all around the world.

“We have the most dramatic, beautiful setting of any art fair in the world.”

And it seems the fairground setting is the way of the future for the art market.

“This is the way more and more art is being sold,” Mr Cameron said.

“It’s very difficult to get around Australia and see it all, this is the best way to see it all in one location.

“The Melbourne Art Fair is really Australia’s art fair, that happens to be located in Melbourne.” 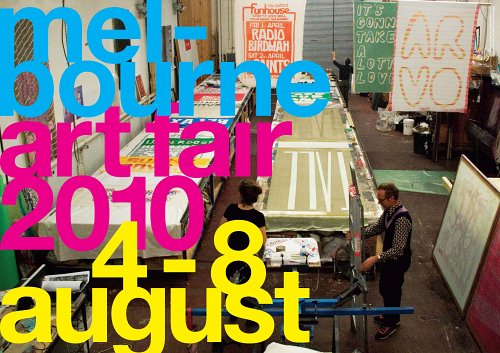 Having gathered works from the far reaches of Australia’s vast land, the Melbourne Art Fair attracts big name commercial and private art collectors, as well as everyday art lovers with a little less platinum in their credit cards. Among those perusing the stalls this year was VIP David Walsh – he who infamously snapped up John Brack’s The Bar painting in 2006 for a record $3.17 million, leaving the National Gallery of Victoria, which had been desperate to buy the painting to pair with its companion piece Collins St, 5pm, simultaneously blushing and stamping its feet. Whether anything from this year’s show will go towards Walsh’s planned $55 million private museum, The Museum of Old and New, in Hobart is yet to be seen.

But the Melbourne Art Fair is not just for those of us who live our lives behind the tinted dark windows of our private limousine and the cavernous walls of our architect-designed mansions. Prices start at only $100, and, this year, many artists have turned out work that will hang nicely in a more homely setting.

“We’ve been surprised this year, there really has been a return to painting … I think following on from the GFC a lot of artists have focused on making work that people can buy for their homes, beautiful things,” Mr Cameron said.

This year’s fair has dedicated 10 “Project Rooms” to up-and-comers, art studios and cooperatives, whose work has been commissioned by MAF.

“The art fair is a great way for artists to put their work up on a stand … they save their best work for the fair…. they all come, they like to see what their colleagues are doing… they [the stalls] look like mini -curated exhibitions,” Mr Cameron said.

“I think you’ll see more and more art will be sold this way.

“It’s the best way to visit all these galleries.

“By coming to the Art Fair, you can see it all here in one beautiful setting … it’s also a great way to compare artworks,” he said.

The Melbourne Art Fair runs until August 8, and this year features a major work from Jon Campbell, commissioned by MAF.

The Hyundai A-League Kicks Off

The Hyundai A-League Kicks Off

Couldn’t get enough of the FIFA World Cup? The Hyundai A-League kicks off tonight and presents a brilliant opportunity...
© Onya Magazine 2009 - 2021
Back to top