By The Sieger Gals

Mission: Find an exclusive hangout. Find an event fresh and quirky enough to leave us wanting more. An event full of atmosphere, and a great passion for real talent.

If you want your feed of real, raw and interactive art, music, fashion and good times, this is it.

As a preface, we are encouraging everyone to consider the positive impact homosexuality has had on Australian culture. As we have all come to realise, though maybe not so much accept, homosexuality is a lot more apparent throughout Australia than it was, say, twenty years ago. We want you all to embrace this culture, because honestly, it’s the new black.

Oh, if you’re wondering how this correlates with Qsesh here’s how; Qsesh pays direct attention to the not so confused teens and their sexuality. This element is what we found intriguing and evidently refreshing. It was like stepping into another world. We rocked up at the cute getaway and found Chad, Creator and Organiser of Qsesh. The regular crowds that attend Qsesh are young people that embrace their sexuality and share a passion for unique talent. Everywhere we looked there were pretty girls with short haircuts wearing flanno’s, and trendy boys with so much grace. It is an underground click (you could even say family) that doesn’t discriminate, that generates creativity in Brisbane, and that makes you feel like you belong. 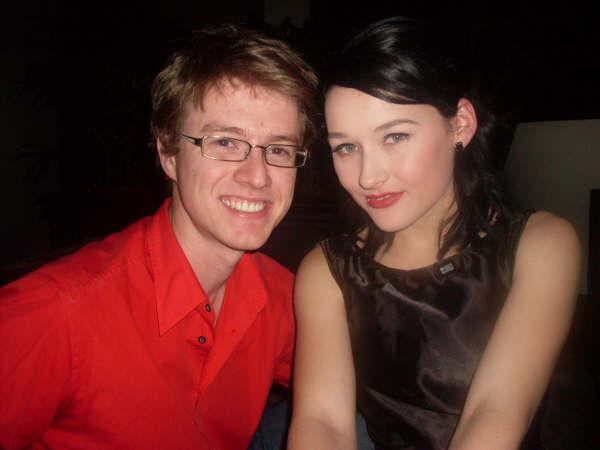 Above: Members from Teatime in Technicolour

Anyway, back to the juicy events on the night. The night began with an acoustic set which was followed by a band called Teatime in Technicolour; a collaboration of two close friends who entertained the crowds with a unique variation of jazz, pop and experimental music. Suzie, the front lady of the band, claimed, ‘We’re not your Ministry of Sound’, and told me their music avoids all boundaries, without being, ‘Tied to an image,’ which seems to fit in nicely with the whole vibe of Qsesh. It’s these people who, in a subconscious way, bring a little more quirk and spark to the Brisbane streets.

Next up was a Burlesque show performed by some of the most gorgeous looking girls, one of which was Suzie. The entertainment for the night had the crowd cheering in sheer excitement. They loved it all. Chad introduced us to another star of the night, the talented graphic artist Damian George-Cox. We stole Damian from his fans and got to sit down with him briefly. We asked him what his art brings to Brisbane culture. He was telling us how he had recently been working with Disney, and had stepped away to release his own version of renowned childhood nostalgia. Along the entire back wall was print after print of his amazing work; we agreed upon calling it a sexed-up version of Disney. Something that he stated was, ‘Disney for the older generation…something we can appreciate’. 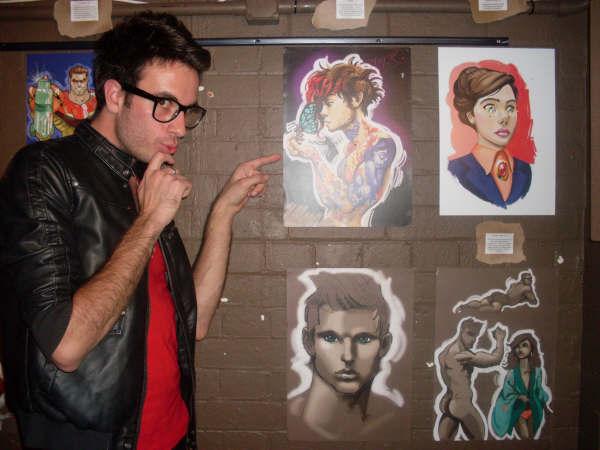 Chad told us that he wanted to establish somewhere people could network, chill out, and have an opportunity to expose their work; an opportunity often not afforded to underdogs. There is, in fact, a designated area for street art, using spray paint and stencils, which gives street artists, who are unable to colour the streets, a great chance to release their creativity. Chad wanted Qsesh to be a pre-clubbing hangout session for homosexuals. He feels there is no competition with other Sunday night-clubs such as Fluffy at the Family; which is for homosexuals but still in the category of real clubbing (getting messy). The young people that frequent Qsesh feel comfortable, and are exposed to something entirely different to the clubbing scene in Brisbane. We would have to agree that these days it is hard to find a place where it’s not all about chatting up girls, or hooking up, or getting utterly sloshed. Especially on a Sunday night. Qsesh creates an atmosphere that Chad has noticed to be very luring to the young and gay, and he describes how ‘trippy’ it has been with the crowd evolving from fortnight to fortnight. 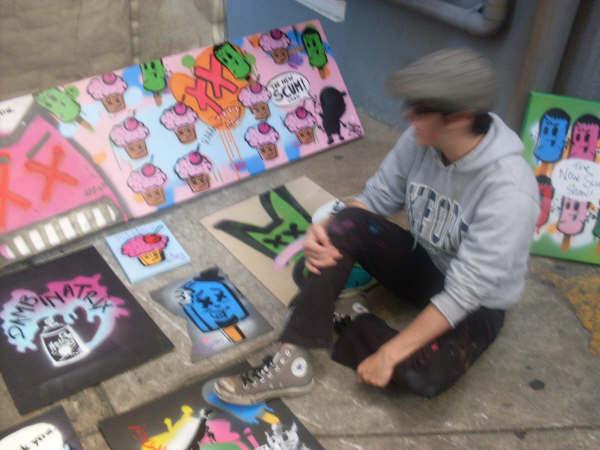 Above: A street artist on the night

We discovered that Brisbane has a lot more to offer social butterflies than what we first anticipated. And we feel strongly about the intentions behind Qsesh; being a place where everyone is welcome. Gay, straight, trans-gender, whatever your preference, Qsesh invites you. Qsesh is evolving rapidly and, as graphic designer Damian expressed, ‘It is going to become Poseidon’.

So there, you have it all, in one six-hour long ride. A local hangout, a buzzing atmosphere and an adorable crowd of people, with, most importantly, a certain factor that everyone holds very close – freedom of sexuality, and a real passion for art, whatever the genre. How else would you want to spend your Sunday?

We find it fascinating that these young people, who although are complete individuals, all share the same passion for art, music, fashion and are accepting of any sexuality. It’s these people that bring a little more quirk and spark to the Brisbane streets.

Before the event reaches its peak, we get some exclusive one on one time with the Creator and Director of Qsesh, Chad. As we sip our alcoholic beverages, we ask him to give us more of an insight into his vision. Chad hopes that the event will continue to be, ‘Classy, not trashy’, and become, ‘A permanent fixture on the Brisbane scene’. He hopes, ‘It’ll grow, and encourage and inspire more talent, and be a place for Brisbane’s creatives to network’.

We aren’t aiming to throw Qsesh into the mainstream with this article, but to simply inform more people about the unknown side of Brisbane. We think a lot of people have a certain perception of our city; that we’re very laid back, that we only enjoy simple fashion, but there is an exploding underground culture going on, which includes incredible fashion, experimental music, amazing artwork and passionate, inspired people.

To find out more about Qsesh, visit Chad’s website Queer In Translation here.

awesome article. I bloody loved it and it’ll just keep getting better! Thanks guys love you muchly!!! x

By Jonathan Howcroft Man was born to love Though often he has sought Like Icarus, to fly too high And far too lonely...
© Onya Magazine 2009 - 2021
Back to top